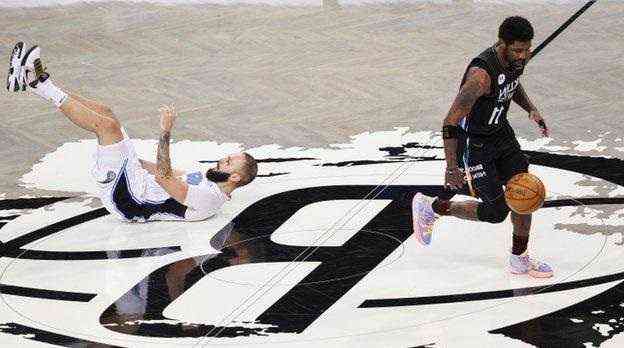 The Orlando Magic ended their losing streak of results. And he did it in the most unexpected way: by beating the Brooklyn Nets. Victory by 121-113. To leave behind an ordeal of 9 consecutive defeats. It was Aaron Gordon’s night.

Gordon has been injured for much of the season. But now, it seems to start to see the light. Today, his best score for the course. Gordon added 38 points, 6 rebounds, and 4 assists. Colossal in the shot with 14 of 20 in the field and 7 of 8 in triples.

That spectacular performance by the local player had its counterpoint. That counterpoint came from the hand of Kyrie Irving. The Nets player was left without a prize. But his performance was to frame it. He made 43 points. A real whirlwind.

Orlando dominated the contest. The first part was even: 64-62. Gordon already had 22 points. And the novelty was the great first half of the local Chasson Randle. Magic was in the game despite the poor play of their big star, Nikola Vucevic.

In Brooklyn, 24 points to rest for Irving and only 4 for James Harden!

The locals had bombed the visitors from triple. And that was a weapon that they would not abandon throughout the game. Orlando finished with 21 triples scored. And being above 50% at the far launch.

The worst for the Nets came in the third quarter. Partial of 39-22. The defense of New Yorkers was a pantomime. And it is not that they had defended efficiently in the first half.

However, everyone thought there would be a comeback. Even more so when the last quarter started 1-16. And Brooklyn shortened to 104-100.

With 4 minutes to go, the result was 111-105. And almost everyone continued to trust the visiting victory. But it was not like that. Those of Nash were unable to get closer. They never had a real chance of success.

Orlando’s first victory in March. With Gordon in a big way. But also with 31 points from Frenchman Fournier. And with 22 points, 14 rebounds, and 8 assists from Vucevic. The Montenegrin came from scoring 5 points in the first half. With 2 of 12 in the shot. His improvement after the break was evident.

Brooklyn had Harden on 19 points and 9 assists. It was not his day. It failed a lot. He was sparing in the attack. Joe Harris was also erratic. But he finished with 16 points. And the Nets left Orlando empty-handed. With unexpectedly empty hands.