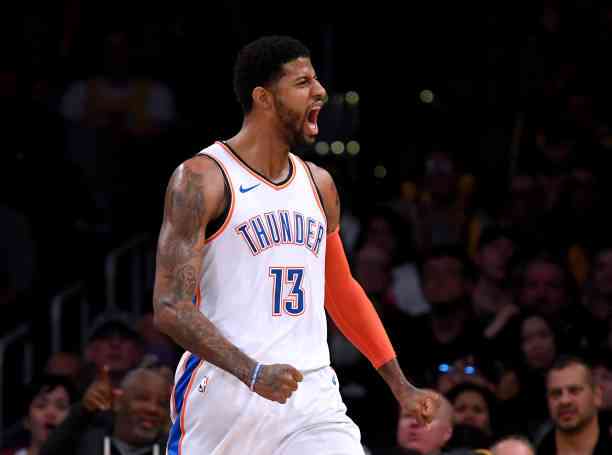 Paul George will do well against the Suns. His best touchdown of the season came in January against Phoenix. With 39 points. And today he has endorsed them 33 to lead the triumph of the Clippers. Watch out for George! He’s starting to look like the best George.

The forward has scored 36 and 33 points in his last two games. With spectacular success from the triple: 6 of 9 a couple of days ago and 7 of 9 today. With Paul George one hundred percent, things change for the Clippers. And a lot.

George finished the game with 33 points and 7 rebounds. He scored 10 in the final quarter. He presented a 12 of 19 on the field goal. And he was a luxury gunner from the triple. Kawhi Leonard accompanied him with 27 points (19 in the second half). Huge kill the one you did to Deandre Ayton.

The other big news, besides George, at Clippers was Rajon Rondo. The newly arrived base is already starting to produce. Against the Suns, 15 points and 9 assists in 19 minutes. With 3 of 4 from triple. With him on the track, +24 for his team.

But Clippers also had bad news. Patrick Beverley and Marcus Morris were sent off in the final quarter. They are two common suspects. They do not have an excess of intellect.

Beverley was sent off for a blatant 2 on Chris Paul. Another cable crossover of an unbalanced type. An action without feet or head in a part of the court where the game is not vital. Patrick’s stuff.

Morris was sent off with 1:24 remaining for protesting. Double technique. The Morris lives run parallel. They play on LA teams and get kicked out on the same day in much the same way. In the final stretch of the last quarter for protesting without break. It happened today.

Neither of those two expulsions stopped the local triumph. Clippers is a very well-made team that is still waiting for Serge Ibaka. And meanwhile, he wins his matches.

Party in the upper echelons of the West. Clippers and Suns face off at Staples. Or what is the same: the third and the second of the conference. And the party did not break. It was even in its first three quarters. It was in the last one that the extra gear that Clippers was hiding came to light.

That extra gear may have been given by time. Clippers had played 48 hours earlier. Suns had done it just 24 hours ago. And facing the Jazz. Perhaps that is why the Arizona team did not see it too clear in the outcome.

The truth is that the Clippers solved the ballot well. The locals defended well in the final stretch. But do not forget that this team attacks well. Today, 50% in the field goal, 18 triples touching 50%, 11 of 12 in free, and 10 turnovers.

The game was tight. At the break, 54-56. At the end of the third quarter, 81-83. With a final stretch, not without actions for the viewer. The triple on Kawhi’s possession horn. An exhibition of Rondo’s footwork. Dance with a wonderful twist to send the rivals to St. Petersburg. With a hard foul from Devin Booker to Kawhi. Flagrant 1. And everything was pending for the last 12 minutes.

But the last quarter was the Clippers. Leaving the rival at 22 points in the last 12 minutes. With Rondo at a high level. With George on a high level. Lue’s men had a 16-point lead in the final quarter.

Phoenix fought as far as his strength came. He hasn’t had a good day since triple. Devin Booker had 24 points. Bridges had 20. Ayton, 18 plus 10 rebounds. And Chris Paul faltered today. Age has to be noticed when you have to make two extreme efforts in 24 hours. And playing the Jazz and Clippers this often is quite a challenge.

Who Are Natalie Sago And Jenna Schroeder, Historical Referees of The NBA