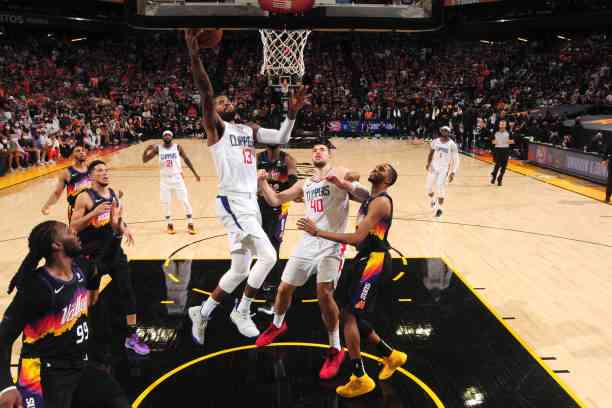 Alley-oop winner of Crowder and Ayton and great match of Cameron Payne to win 104-103. Los Angeles Clippers started a series again in these playoffs, losing 2-0.

Winning a game like this is more than just winning. The Suns worked magic in the last second to defeat the Clippers 104-103. A master board after Monty Williams timeout. And a perfect execution by the duo Jae Crowder – Deandre Ayton.

There were 9 tenths of a second left to finish the game. Phoenix trailed 102-103 and served from the bottom of the rival team. And it took him only 2 tenths of a second to cause madness at the Phoenix Suns Arena. Each player was deployed on the track according to the plan drawn up. Crowder’s assist for the alley-oop was perfect. Devin Booker’s block was crucial. And Ayton crushed the rival rim, beating Ivica Zubac.

Ayton was enthroned with the winning basket. But his whole game was excellent. He served as a dominant pivot. The masterful performance of Cameron Payne as Chris Paul was overwhelming. Because again Paul and Kawhi Leonard missed the date.

Payne finished with 29 points and 9 assists. He made the game of his life. He has amazing cheekiness. It shows in vein. And Ayton had 24 points and 14 rebounds with 12 of 15 on the field goal. Unstoppable. Another vindictive night on his part. The No. 1 in the draft of Doncic and Young requests focus.

Second game of the West Finals and second win for Phoenix. For Clippers, it is already a habit that is taking dangerously deep roots in the team. He started out losing 2-0 in the first round to the Mavericks. They started falling 2-0 to Jazz in the conference semifinals. And now it also starts with a 2-0 against.

This time Lue dropped the small ball entirely. He bet without dissimulation on a more classic game. Ivica Zubac was on track for 34 minutes. And the one who fell a lot out of the rotation was Nico Batum. Substitute and 16 minutes of action.

Phoenix is ​​on a roll. Now have 8 consecutive playoff victories! Against the Lakers, Nuggets, and Clippers. Almost nothing. And everything points to Chris Paul having more prospects of returning to the game soon than Kawhi.

The end was the playoff raised to the umpteenth power. An end with a lot to referee. The collegiate worked overtime with complicated revisions. Complicated was checking the ball touched by Pat Beverley defending Devin Booker. There were 9.3 seconds left, and it seemed decisive. The ball went to Clippers. And the play was not decisive in the end. Then came the review of the winning alley-oop. The time was reduced from 0.9 to 0.7 seconds after the action. And shortly after it had to be verified that there had been no irregular changes on the part of Clippers. I said, the referees earned their salary.

The conclusion was a jug of cold water for Paul George. He had signed a wonderful last minute. In that final minute, he had supported his team scoring 6 points. But in a vital moment, all the pressure fell on him. He missed 2 free games with 8.2 seconds remaining. It was in the end the grave for his team. Because the subsequent mistake from the corner of Mikal Bridges is already forgotten. His team’s victory buried that action. As if it had never existed. George, on the other hand, scowled.

It was a very balanced game from start to finish. Phoenix led most of the night. But the most he gave him was to have a maximum advantage of 9 points. It happened in the third quarter (63-54). The marker always moved in very tight figures. And the statistics, too. The worst for the locals was their 3-point shot (6 of 26). But in return, they shot better than 2 to be 50% on the field goal. Both teams captured the same rebounds on offense and defense. Both teams moved in almost identical figures in fouls and lost balls. The general trend was equality.

The game had passion, a lot of defense, and a considerable physical display. And he went on to reach battle terms in some matchups. The stellar duel on the night was the one that measured Beverley with Booker. Excellent defense of Beverley. Booker stayed at 20 points. With 5 of 16 in the shot and 7 losses. Collision of the fat women. And it’s not a metaphor. Physical collision of trains. Head to head in the third quarter. The two of them to the bloody locker room. Fortunately, they were able to return to the game later. The image of the match, if Suns hadn’t produced a winning masterpiece in the end.

Suns had Dario Saric and Cam Johnson in double-digit winners. There was also the work of Crowder. And his wisdom in the decisive move.

Paul George was the best visitor. He added 26 points, 6 rebounds, and 6 assists. He was bad from the triple (he missed his first 7 attempts and finished with 1 of 8). He was at a great level in the last minute. But he missed 2 free at the most inopportune moment.

Reggie Jackson worked again: 19 points. Impressive their playoffs. He is a player born again. Zubac had 14 points and 11 rebounds. He had good and bad moments. Rondo and Mann contributed from the second unit. And Luke Kennard got strong in the fourth quarter. But it all fell apart with that magical alley-oop. These Clippers are going to have to come back again. They seem destined for this trance.