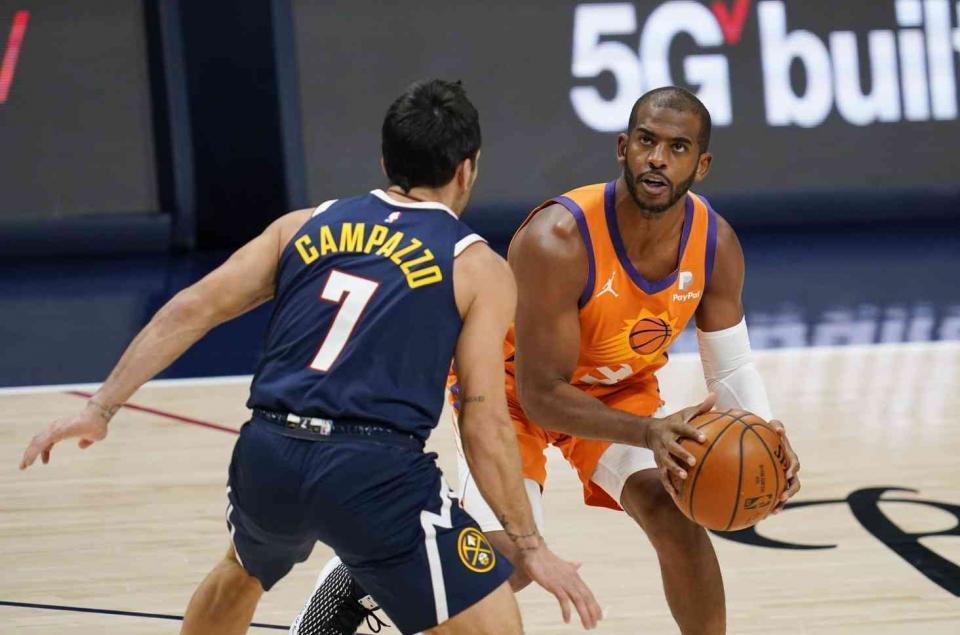 Suns prevail in the second half despite Jokic’s 32 points, 20 rebounds, and 10 assists.

The West semi-final between the Phoenix Suns and Denver Nuggets is practically over. The Suns have also won Game 3 in Denver and are going 3-0, whose comeback goes against history.

Of the 142 times, a team went 3-0 in a playoff series, 142 times it won in the tie. And it does not seem that these Nuggets, with the physique they present right now, are to make history.

Nikola Jokic could not finish celebrating his award. Today he received the MVP trophy at the Ball Arena, and then he jumped onto the court and offered an MVP performance to the point of signing 32 points, 20 rebounds, and 10 assists, a monstrous triple-double with few precedents. Only two other players made at least 30-20-10 in the postseason: Wilt Chamberlain and Kareem Abdul-Jabbar. But it mattered little for the future of the game and the series.

Defeat 102-116 against a very superior Suns led by Devin Booker (28 points) and especially by Chris Paul (27 points, 6 rebounds, 8 assists, 3 steals, 2 losses and 9 of 16 on the field in 37 minutes). The Paul thing is hideous. In the Suns’ 3 victories against the Nuggets … 34 assists and only 3 turnovers! Delirious. And he looks fresh as lettuce in the last quarter of games.

Three games and victories for Phoenix by 17, 25 and 14 points, comfortable triumphs sheltered in the physical abyss that separates both teams. On the three occasions, the third quarter was an insurmountable wall for Denver, the three defeats came from a dominance of the Suns in the second half protected by their best background, in the best state that Monty Williams’ team has reached the postseason.

It’s clear that Denver has physically squeezed itself this season to overcome its many casualties, including that of essential Jamal Murray. That has required a lot of efforts that are now noticeable in the legs.

Phoenix has returned to dominate at will from the break. He started in a big way scoring 37 points against Denver’s non-existent defense and went halfway through the game winning 55-59, leaving the best for the second half, and specifically for the third quarter, which ended with a 21-31 run for place Phoenix with 76-90 in favor, its maximum advantage until then.

Shortly after, at the beginning of the fourth quarter, that advantage reached 20 points. He had not departed.

Denver in tow, Denver defenseless throughout the game, Denver legless throughout all three games. So it is impossible to face a team like Phoenix. In fact, today only two players who come from injuries and are more rested have accompanied the incombustible Jokic in attack: Monte Morris (excellent with 21 points and 5 assists) and Will Barton (14 points and 7 rebounds playing already 28 minutes). The rest, touched or with their tongues hanging out.

Especially disappointing Michael Porter Jr., who started scoring too late, and Aaron Gordon, badly bad. We are not facing the best version of Facundo Campazzo either. Today he has only played 17 minutes for 6 points without assists.

The Suns have had their starting five in double digits scorers. In addition to Paul and Booker, 14 points from Jae Crowder, 11 from Mikal Bridges, and 10 plus 15 rebounds from Deandre Ayton.

The visiting attack has worked like clockwork. The only weak point of the Suns has been the rebound. The Arizona team finished the game exhibiting an exquisite movement of the ball and playing at pleasure against some Nuggets surrendered to evidence. This series is finished.