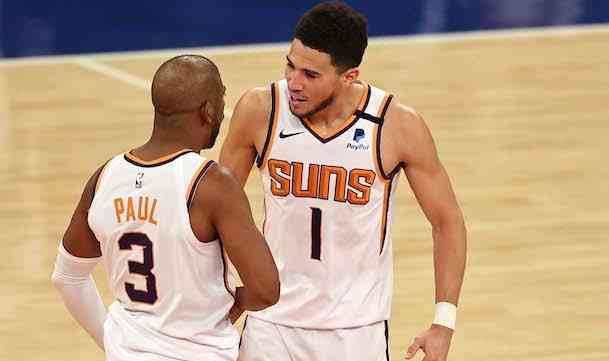 The Suns win in Denver 118-125 and end the series by winning 4-0. Denver loses MVP Nikola Jokic in the third quarter after being sent off.

On the fast track and without concessions. Phoenix Suns qualify to play the Western. Conference finals through the front door. Fourth game and fourth win: 118-125 in Denver. With the emotional expulsion in the third quarter of MVP Nikola Jokic. It is the Phoenix Suns’ first visit to the Western Finals in 11 years.

Monty Williams’ team took on the exhausted Nuggets. A few Nuggets without Jamal Murray who were also without Jokic. Phoenix was over 50% on the shot. He finished 29 of 31 in free practice. And he was the dominator of the game. He has proven to be two steps ahead of his rival.

The Suns gallop at full speed with Chris Paul at the helm. Chris Paul and Devin Booker are a couple full of elegance and effectiveness. It’s nice to see them play. And in this last game they have come together to show their maximum expression of basketball. Between the two of them they have scored 71 points!

The Chris Paul thing has been fascinating. He has just turned 36, but no one would say. He’s a kid. Spectacular his performance against the Nuggets. Today he has curled the curl of stellar longevity. The Suns point guard finished with 37 points and 7 assists. After making 14 of his 19 field goals and his 9 free shots without any failure. His master class in the range of 4 meters, apotheosis. A globally televised clinic. The soul of these Suns has scored 25 points in the second half. Fireproof. With an enviable physique. And with a head populated with the best furniture.

Devin Booker has not lagged behind. He was looking forward to the playoffs and his first postseason being divine. Today he has added 34 points and 11 rebounds. Spectacular its competitive intensity.

The third essential player in the Suns has been Jae Crowder. Top-tier defender. Excellent back. He finished with 9 points, 10 rebounds and 4 blocks.

Mikal Bridges and Deandre Ayton were also in the scoring double digits. With Bridges coming to the rescue of his team at an important moment in the fourth quarter.

Denver started with changes to its starting five. Facundo Campazzo and Austin Rivers became substitutes. Their positions were filled by Monte Morris and Will Barton. They all performed very well except Rivers.

The party was under Phoenix’s dominance. At the break, 55-63. The difference lay in the triple. Jokic and Booker were the stars.

The third quarter started, Denver went 70-71. But Chris Paul’s drip irrigation came up. Basket to basket. Always making the right decisions. Until the play of the match arrived: the expulsion of the Serbian.

It can be argued if it was flagrant 1 or flagrant 2. But what does not seem debatable is that Jokic went under braking. It was an action pregnant with frustration. Again too lonely in the attack. Again on the way to defeat. Again offering an insufficient MVP level to beat the Suns. He hit the ball and the nose of Cameron Payne. Jokic and Booker faced each other. The players crowded together. Not step over. But the local star ended up on the street. Before going to the locker room, he kindly addressed Payne. The stands roared “MVP …”. Denver was missing the last train. The 4-0 seemed sung.

Jokic left with 22 points, 11 rebounds and 4 assists. The shock was immediate. Shortly after the expulsion, 80-96 for Phoenix. At the end of the quarter, 83-96. But then came an unexpected reaction.

The last quarter began. And from that 80-96 … partial of 17-5. Denver got only 5 points (97-101). Facundo Campazzo was working. Michael Porter Jr. and Will Barton scored. The team was positive with JaVale McGee on the court – he played 20 minutes. They called Chris Paul a technique. The changing world of the playoffs. A crazy situation until Bridges and Paul put the direct. Of course, with Malone collaborating with him by removing Campazzo at 5:15 from the end. Incomprehensible. When your team was working best. He was the only one who at least bothered Paul.

Then he came across reality. Denver came down from the cloud. Paul made a 2 + 1 against a sleeping Porter Jr. And then another from Paul and a mate from Ayton defined the situation. Score of 107-118 with 1:37 left. Even Malone returned Campazzo to the court when it was too late. The truth is that with the Argentine or without the Argentine the game was the Suns yes or yes. Everything was settled. Although the locals still did not give up.

In addition to Jokic, 25 points from Will Barton. Porter Jr. made 20. But he hasn’t made the cut in this series. As it has not been given by a very disappointing Aaron Gordon. Morris had 19 points and 6 assists. And Campazzo closed the season with a good performance. Cordovan scored 14 points and 2 assists in 22 minutes. With good percentages. And a 4 of 7 from triple. With him, the last remaining Hispanic player left the playoffs.

What is happening with the Celtics?