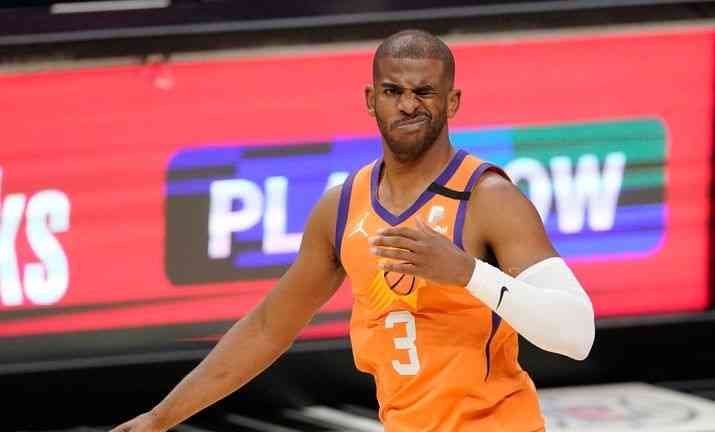 Milwaukee rescues Giannis Antetokounmpo from his injury, and the Greek plays 35 minutes.

It was Chris Paul’s time. The Suns point guard had been waiting for a game like this for 16 years and responded, as expected, with a stellar performance to lead Phoenix’s victory over Milwaukee in the first game of the Finals.

Giannis Antetokounmpo returned unexpectedly, but his physical exuberance, he looked pretty good, was not enough to stop the gale caused by Chris Paul and his two great squires, Devin Booker and Deandre Ayton. The local big tree was at its best, and the Suns won 118-105 to make it 1-0 in the fight for the title.

These are Finals marked by time, by waiting time, by the extreme patience developed from both sides. Phoenix had not reached the Finals for 28 years and is still waiting for his first title, Chris Paul has had to play 16 years in the NBA at the highest level to reach this moment, and Devin Booker has waited 6 years to make his debut in the playoffs in a big way; Milwaukee, meanwhile, accumulated 47 years without Finals, its only title is half a century old and its great star, the 2-time MVP Antetokounmpo, has had to walk 8 seasons in the league to finally appear in a Finals.

With all those semi-resolved emergencies, we had a nice game, a game with rhythm in which Phoenix was setting the tone in the game and on the scoreboard and in which it was happy to see Anteto play just a week after suffering a tremendous hyperextension against Atlanta on the left knee, which shows the Greek’s privileged physique, who started the game already trying a dunk and put a prodigious stopper on Mikal Bridges, playing the second quarter.

The work of the local big three was excellent, which totaled 81 points. Chris Paul acted as the undisguised leader with 32 points and 9 assists, in addition to making 12 of his 19 field goals and being successful from the triple to finish sitting in the chair for the umpteenth time; Devin Booker added 27 points, gave 6 assists, was good in important moments, and his only fault came from the triple; and Deandre Ayton made a remarkable debut in the Finals with 22 points, 19 rebounds and 8 of 10 shooting.

Added to them were an inspired Mikal Bridges, which this time did work in attack, and contributions from the second unit by Cam Johnson and Cameron Payne. On the downside, Jae Crowder’s 0 of 8 on the field goal and Dario Saric’s injury when he had only been on the court for 2 minutes.

The best of Milwaukee was Khris Middleton, author of 29 points, 7 rebounds, and 5 triples. Irreproachable his performance. Anteto, meanwhile, showed a physique well above the expected and endured even if he reached for his knee in the third quarter. He finished with 20 points and 17 rebounds, but he threw half the field goals, 11, than he is usual. Brook Lopez added 17 points in 23 minutes and Jrue Holiday was the visiting star player who suffered the most, finishing with 10 points, 7 rebounds, and 9 assists after showing erratic shooting.

The meeting left us a lot of data for analysis, data that shows that some estimates of what the match could be were not met.

Neither the Suns second unit was better than the Bucks second unit (they played practically the same minutes and each scored 22 points), nor did the game in the paint fall on the visiting side (44-42 in points in the zone for Suns), nor the triple moved in unsettling terms for Milwaukee, which was better than the locals going to a 44.4% accuracy with 16 scored, nor did the presumed superiority in the rebound of Bucks end up materializing on the track.

In other words, many tendencies of these playoffs were not embodied in the first game of the Finals, but one did, and it was lethal. Phoenix was once again a lethal team from free practice, and Milwaukee was not. The Suns entered the game with an 86.2% effectiveness from the penalty line and presented in today’s game a tremendous 25 of 26 by the Bucks’ discreet 9 of 16, with Anteto in an acceptable to him, according to the terms he is handling, 7 out of 12. In free practice, there was a lot of game, because it was in them that a notable advantage was generated in favor of the local team.

In fact, Phoenix broke the game in the third quarter with an Imperial Chris Paul (16 points in the fourth). In that quarter, Monty Williams’ men had a 20-point lead. Suns had only 7 fouls committed at the end of the third quarter after playing 36 minutes of a Finals. Few crave. Outside of a certain homely tone from the umpires, no one can doubt Phoenix’s superiority in this first game.

In the fourth quarter, Milwaukee was able to reduce that deficit from 20 to 7 points. He did just that when Budenholzer opted for a small ball quintet with Antetokounmpo as the tallest player and when Milwaukee continued to hit 3-pointers – he had already done it very effectively in the third quarter – but Chris Paul and Devin Booker reacted to rebuild the situation, and the Suns controlled the entire final stretch of the game in an exemplary manner.

Phoenix modeled the development of the game under Paul’s wise leadership. The team only lost 9 balls all night and made good the statistic that every time they have taken at least 10 points of an advantage this postseason, they have ended up winning the game.

The visitors had problems with the game of blocking and local continuation, although more than once they solved that equation well, and dragged serious difficulties in the defensive changes after blocks.

The Suns, who took over the rhythm of the game, broke the game at the beginning of the third quarter (57-49 at halftime with the maximum advantage until then) when Chis Paul made a 3 + 1 with a blatant 1 from Jae Crowder to put a 63 -52 that grew like an incessant trickle to a maximum of 88-68 with the locals exhibiting their best offense and with Chris Paul dismantling the rival.

This first game has been solved with exquisite solvency on the part of Phoenix, but the Finals have only just begun, and they have done it with Anteto at stake.