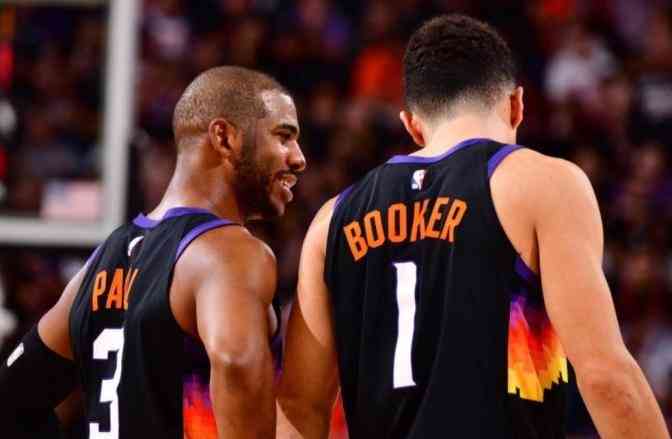 Ayton, Paul and Booker lead the win in a game plagued with errors to go 3-1. A giant leap from Phoenix Suns to play their first Finals since 1993. Agonizing 80-84 victory at Staples Center. The Suns advance to 3-1 against the Clippers again without Kawhi Leonard. A difficult return line for the Los Angeles team.

Deandre Ayton was the best player of the match. He dominated the boards. He finished with 19 points, 22 rebounds and 4 blocks. Another show of power from the young pivot. Huge Ayton. Devin Booker had 25 points with 8 of 22 on the field goal. He had a couple of spades with Paul George settled with a technique for each player. Gambling the third quarter he took off his mask. I was tired. From that moment, he was seen as more aggressive in attack. And Chris Paul was again erratic (6 of 22 in the shot). He had 18 points and 7 assists. It was decisive by scoring 5 free in the last 7 seconds of the game. It is life insurance.

Also, 13 rebounds and great defensive work from Mikal Bridges. And I return to the game of the Egyptian Abdel Nader. He had not played for 3 months due to a right knee injury.

In Clippers, 23 points, 16 rebounds and 6 assists from Paul George. Said like that it sounds great. But it sounds worse if it becomes clear that he made a 5 of 20 on the field goal. From the triple, 1 of 9. Reggie Jackson had 20 points with 8 of 24. His best moment was the third quarter coinciding with the best Clippers. Ivica Zubac added 13 points and 14 rebounds. He was on the track for 40 minutes. Terance Mann had 12 points. And Patrick Beverley was again intense to the core. He does not know how to play any other way. From Rajon Rondo, no sign.

Phoenix was able to win the game despite scoring just 34 points in the second half. That says a lot about how the meeting was. There were times when the ring seemed to be the diameter of a small glass.

The fourth game of the series was intense. There’s no doubt. As there is no doubt that it turned out to be erratic, too erratic. Hard on the eyes at times. The last quarter was a physical battle of the first order. But above all, it was a minefield for any offensive enjoyment. Horrible is little. A final quarter of the worst that is remembered. And a chaotic party resolution. Worthy of the development of the last quarter.

Clippers had as many as 13 chances to tie or take the lead in the final quarter! … and did not take a single one! At one point, the two teams chained 16 consecutive missed field goals.

The partial of the last quarter: 14-15. With the premises in 3 of 19 in the field shot. With the visitors in 4 of 19. In 12 minutes, 7 of 38 in the shot to the basket. And in 12 minutes, 0 triples scored! The hammer war. Don’t look for fancy weapons. He defended himself a lot, yes. It was physical and intense. There were piques and excitement, too. But the offensive basketball deficit was so deep that it marred everything.

Clippers only attacked well in the third quarter. It was his best moment. Just when he practically dispensed with the triple. There it was better for him. He had reached the break with 36 points (36-50). After scoring 9 points in the first 9 minutes of the second quarter. But the 30-19 of the third act redeemed the team. Those of Lue finished the third act losing 66-69. He had left.

Then, missed occasions and occasions to turn the light around. The party became muddy to unsuspected limits. Scoring a basket was an odyssey. With 1:05 to play and 74-79 on the scoreboard came a play that could be key. There were 2 free for Devin Booker. You could put Suns 7 up. But the review revealed an offensive foul by Booker. Your personal sixth. It fell. And seconds later, Clippers was 3 points behind.

The ending had surreal overtones. Chris Paul missed 2 important shots in play. But then he hit 5 crucial free kicks in the last 7 seconds to give his team the victory. Of course, one failed. Until that moment, he had 36 consecutive free throws made. His pulse did not fail.

In the end, a lot of chicha. Up to 3 times, the Clippers looked for the intentional failure from free practice in those last seconds. Both times Paul George tried it, there was a rebound. On the occasion that DeMarcus Cousins looked for him.

The pivot entered a few seconds into play at the end to look for a rebound. He hadn’t played the whole game. The referees whistled a doubtful foul in his favor. The first free scored it. And the second he threw it against the board above the frame without touching the rim. Comical and tragic in equal measure. Seconds later, Chris Paul grabbed an essential ball and lost a shoe. The total lack of control. All a bit grotesque. But Paul was ultimately the player capable of closing the game.

The Suns win a crucial game. With 3-1, they will play at home to seek the Finals. It doesn’t look like Kawhi is going to be in that match. Chris Paul can reach the Finals for the first time in his long career. These Suns are making a low-level playoffs under Monty Williams.