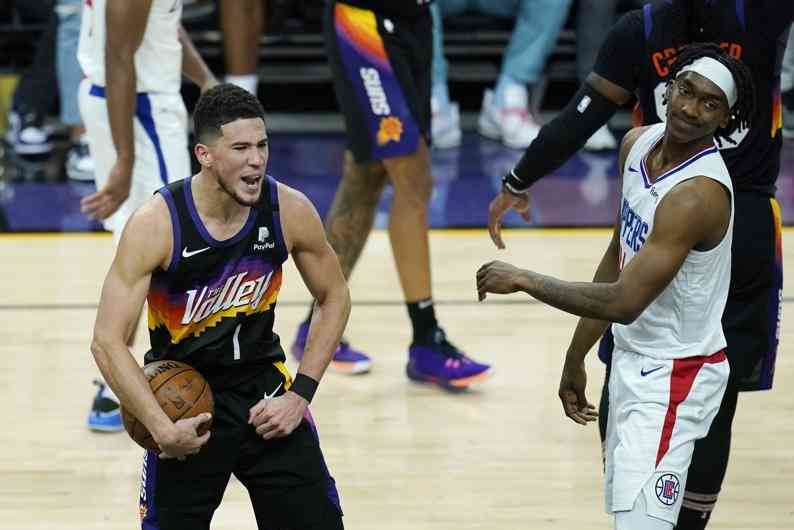 Booker scored 40 points in the first triple-double of his career, and Suns beat 120-114. Western Conference Finals start without Chris Paul and Kawhi Leonard.

What a time to make the first triple-double of his career, and what a time to score 40 points! Devin Booker started like a motorcycle in the Western Conference Finals to lead the Suns’ victory over the Clippers (120-114).

Round day in Phoenix: Executive of the Year award for James Jones, architect of these Suns, and triumph in the strange start of the Western finals, strange for the absences of local Chris Paul (Covid-19 protocols) and visitor Kawhi Leonard (knee), who hasn’t even traveled from Arizona.

Despite the huge casualties, the first fling between Suns and Clippers led to a beautiful game full of alternatives on the scoreboard and marked by stages -first and last quarter- prone to defense and difficult offensive development and others with a marked offensive tendency (72-72 in the two central rooms).

Phoenix is ​​in a very sweet moment. He already has 7 consecutive victories in these playoffs (against no less than the Lakers, Nuggets, and Clippers) and has Devin Booker in a state of grace.

Because the game was Booker, Booker, and more Booker, who also had time to do a bit of Chris Paul when it came to tempering the game and assisting his teammates.

The Suns had been 116-106 on the scoreboard in the final stretch of the game, seeming to accommodate their game to triumphant rhythms, but the Clippers reaction was swift. Rajon Rondo hit a triple, and the Angelenos had several triples in the same play with offensive rebounds until the young Terance Mann, hero of his team’s last game, connected a shot of 3 very important to put the 116-114 with 22 seconds from the end. Phoenix had complicated the end of the meeting. But then Booker emerged again.

Downtime Monty Williams with 22 seconds to play and move decisively out of Downtime: take a throw Jae Crowder, Devin Booker leaves his mark playing exceptionally without the ball, is made with the ball and goes alone to the basket to make a crucial mate (118-114).

The next play, already a bit desperate, does not come out for the Clippers. Crowder defends Paul George very well, Nico Batum misses a triple, and the rebound takes him, yes, Devin Booker! And it is Booker himself who ends the game with 2 free games to put the final 120-114.

Previously, Booker and George had starred in a gunmen’s duel in the third quarter, with 18 points from the first and 15 from the second, a quarter in which Reggie Jackson, wonderful his breakthrough in the postseason, was also great.

Phoenix developed a very good offensive game, with a 55% accuracy in the field goal and a ratio of 31 assists for only 7 turnovers, and was able to survive the bombardment by Clippers from the triple in a game in which the Angelenos made 20 shots from beyond the arc.

In addition to the prodigious performance of Booker, Deandre Ayton did very well: 20 points, 9 rebounds, and 10 of 14 in the field goal. Mikal Bridges added 14 points and was very important in the final scenes, including a pair of dunks for 113-104 with 2:34 left, the first after a very serious error by the Clippers defense and the second after a formidable combination in alley-oop originated by Booker, who with that assistance sealed his triple-double.

In addition, 13 points and 6 rebounds from Crowder, an important player in these Suns, good contributions from today’s starter Cameron Payne and substitute Cam Johnson, interesting minutes at the collective level with Torrey Craig on the court, and entry into the rotation of E’Twaun Moore.

The Clippers attack, which this time started the game with a classic formation away from small ball, was always linked to a great Paul George (34 points and 7 triples), a George who continues to claim his figure in the playoff but who this time ran aground in the final quarter (only 2 points), already a reborn Reggie Jackson, author of 24 points.

Also noteworthy was the unexpected explosion in the second quarter by DeMarcus Cousins (11 points in 5 minutes) and the help from the second unit by Rajon Rondo and, to a lesser extent, by Ivica Zubac. On the negative side, Marcus Morris’s physical problems came from playing very good games.

In short, a good start to the finals in the West in a series that is uncertain due to the losses and the fact that they are the first finals in Clippers history against a team that does not know what it is to win a title.