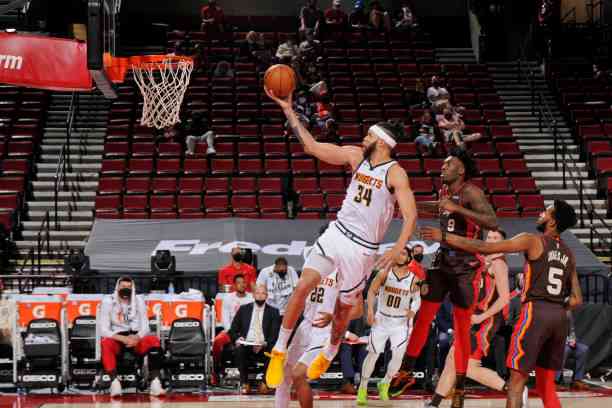 Blazers enter the postseason for the eighth consecutive year and will face Denver.

Denver is third after losing the Clippers in their last two games with the Rockets and Thunder.

It seemed sung that Denver was not interested in any way to face the Lakers in the first round of the playoffs after the Clippers loss to Rockets left the Nuggets at the feet of the horses, and so it has: loss to Portland without any dissimulation.

That Portland victory, coupled with that of the Lakers and the loss of the Mavericks, has caused a triple tie for fifth, sixth, and seventh places in the Western Conference. The three teams with a 42-30 record: Dallas was fifth for being division champion, Portland was sixth for having surpassed the Lakers in direct pairings, and the Los Angeles team has placed seventh and will have to play the play-in, facing the Warriors in the first instance.

Denver, unlike the Clippers, has played with its best possible five against Portland, but it was a pantomime. From the beginning, it was clear that the Nuggets were not going to fight the game, that they had no desire to face the Lakers in the first round of the postseason.

From there, party asleep. At the break, 72-55. And the second part without any incentive. In fact, Denver has started the third quarter without four of its starters, leaving only Austin Rivers in play.

In Denver, 21 points from Jokic in 17 minutes of play and 23 points from young Markus Howard. The Argentine Campazzo played 14 minutes for 2 points, 2 rebounds, and 2 assists.

These two teams will meet in the first round of the postseason, with the home court factor in Denver’s favor.

The Lakers did their job, they delivered. Victory against the evicted Pelicans by 98-110, but the Angelenos did not depend on themselves to access the playoffs.

LeBron James had 25 points in 27 minutes, Anthony Davis had 14 in 30, Andre Drummond had 13 points and 13 rebounds and Marc Gasol played 27 minutes to finish with 3 points, 7 rebounds, 4 assists and 2 blocks.

The top scorer for Pelicans was Spaniard Willy Hernangomez, author of 19 points, 13 rebounds and 3 blocks, and the bad news for New Orleans was the injury of Jaxson Hayes.

Meanwhile, Clippers curled the loop and after losing to Rockets they did the same to Thunder, an unworthy end every way you look, even if most of the important players did not play both games. It seems clear that Clippers, like the Nuggets, did not want the Lakers as a rival either.

OKC’s victory by 117-112, which is the first triumph in the NBA for Argentine Gabriel Deck. The game was very balanced in its final minute.

Serge Ibaka played 19 minutes and had 12 points and 7 rebounds. He continues to refine his body for the playoffs. And his team, Clippers, will reissue last year’s first-round matchup. The rival, Luka Doncic’s Mavs.