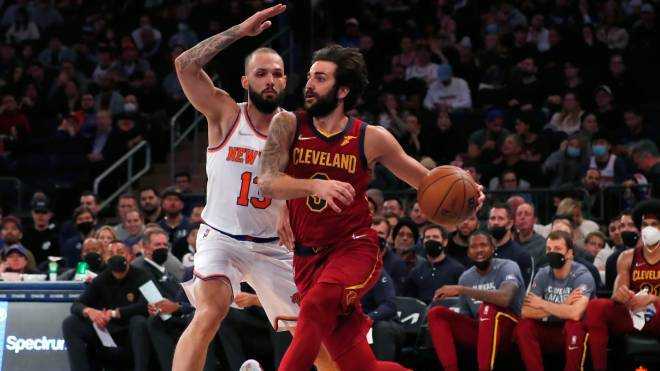 The Cavs win at Madison driven by the talent of Rubio and Evan Mobley. The Spanish international achieved his record of points and triples in an NBA game.

Ricky Rubio’s magical night at Madison Square Garden. It was a luxurious setting for a fascinating performance by the Spanish player, who led the Cavaliers to their fourth consecutive victory after accounting for the Knicks by 17 points (109-126).

Anthological festival of the Catalan base: 37 points, 10 assists, 13 of 19 in the field goal and 8 triples scored from 9 attempted! Ricky hit his first 8 3-pointers without failure, scoring 26 points in the second half and 14 in the decisive fourth quarter! It took 31 minutes to frame, displaying a total basketball in which his usual mastery when directing the game and his also habitual defensive commitment was added a surgical precision when tackling the opposite ring.

The best thing about El Masnou’s point guard was his wise directions for leading his team’s attack and the fact that many of his triples were made by himself. In addition, he left us one of the best plays of the match when in the last quarter he left between two defenders with the boat, penetrated to the basket and resolved in the air by changing the hand ball.

Rubio’s previous scoring record in the NBA was at 34 points and dated from 2018. He achieved it in the ranks of the Utah Jazz against the Spurs.

Rubio finished with a smile from ear to ear, and with the congratulations of all those around him and the Cavs finished with another victory that takes the Bickerstaff team to a dream start to the season: 7 victories in 11 games! The team is loaded with young talent, but … few, if not anyone, had predicted a start of this caliber.

Among that young talent, a gem: rookie Evan Mobley. New quality display of the tall player, who went to 26 points, 9 rebounds, and 5 assists, with 11 of 15 in the shot and 2 triples scored. He has basketball to bore this boy and a future that may be present right now. His first steps in the NBA are being very convincing.

The only bad news in the Cavs holiday season was Collin Sexton’s injury. He could only play 13 minutes. We will have to see how the damaged knee is.

Cleveland continues to grow despite its physical problems, with Kevin Love, Lauri Markkanen, and now Collin Sexton out of the game. Bickerstaff is doing a great job with this template.

Jarrett Allen scored another very good game with 18 points, and 17 rebounds, and Darius Garland added 16 points, with 2 definitive triples that put the 106-122 on the scoreboard to kill the Knicks with a 0-9 run down the stretch of the game.

Tom Thibodeau will not be very happy with his team. It is not in the coach’s plans to fit 126 points. The New York defense did not appear in the game, and the offensive talent of the team, which has it, was not enough to silence these surprising Cavs, the gulf that separated both teams from the triple was crucial, with Cleveland scoring 19 with a 54, 3% effective from Ricky’s ecstasy from the perimeter!

The game had reached the break with 57-56 in favor of the Knicks, with Evan Fournier, Julius Randle, and Derrick Rose, this time starting, leading the local offense.

It was in the third quarter that Rubio and the Cavs broke the deck. Ricky, who had started as a substitute in the match, started the third quarter as a starter, and with 59-57 on the scoreboard, he started his majestic show, including 4 triples of 4 attempts in 3 minutes that left the score at 66-75!

The third act was Cleveland, a defending team, who ended up winning 18-33 to face the final quarter with a 75-89 advantage.

Cleveland held up well in those final 12 minutes by the Knicks’ offensive stunts, only getting in trouble with excessive turnovers. It was an offensive last quarter in which Rubio scored 14 points to consolidate his team’s victory.

New York had 6 players in double digits, but it was bad from the triple, its work on the rebound was poor, and its defense left much to be desired throughout the entire match.

Randle finished with 19 points, 7 rebounds, and 7 assists, Rose added 17 points, and Fournier disappeared after the break, 15. Kemba Walker did not play, and the final quarter of the young Quickley was quite good , as well as the scarce 11 minutes that the spectacular Toppin remained on the court.