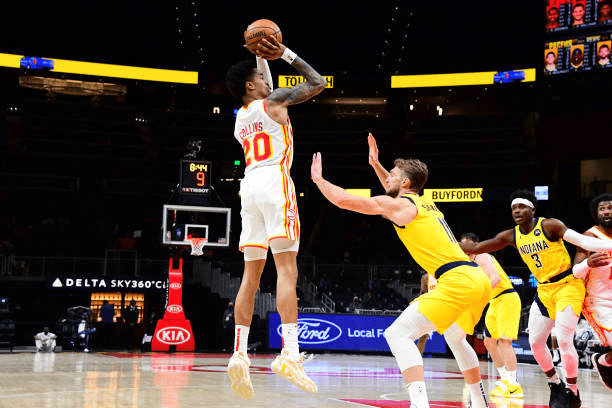 We dealt with the Suns-Sixers, Hawks-Pacers, and Knicks-Rockets games, meetings that ended with victories for Phoenix, Indiana, and New York under Devin Booker’s leadership (Suns), Doug McDermott (Pacers), and Julius Randle and Immanuel Quickley. (Knicks).

Phoenix now has 5 consecutive victories, while the Atlanta Hawks and Houston Rockets are in a serious game crisis.

Phoenix’s fifth straight win to go 16-9 after winning 8 of their last 9 games.

Excellent local offense with 36 points from Devin Booker (14 of 23 from the field goal), 18 points, 8 rebounds and 10 assists from Chris Paul, intelligence and consistency made player, and an outstanding role of the second unit of the team, who scored 47 points for the 20 of the second rival unit.

Phoenix got Dario Saric and Cameron Payne back for the game, with Saric’s notable comeback after being out for almost a month and missing 13 games. Saric led the substitution with 15 points and 4 steals in 20 minutes of action.

The match was 102-97 with just over 5 minutes to go. And there came the key moment: 11-2 partial for the Suns and a resolved game.

Sixers again had an immeasurable Joel Embiid: 35 points and 8 rebounds under his belt. Plus 18 points from both Ben Simmons and Tobias Harris

Weird match this Hawks-Pacers. Meeting between two teams in a crisis that was resolved with a comfortable victory for Indiana thanks to a very unbalanced last quarter.

The game reached that last quarter on a level playing field, until a 7-27 run sank the home team, which lost the final quarter 26-41. Let’s agree to say that conceding 41 points in a crucial final quarter few games can be won.

The strangeness of the match left us data to remember, because they will rarely be repeated in unison: Trae Young was the fifth scorer for his team and did not shoot a single triple in the entire game, and Domantas Sabonis was the sixth scorer for the Pacers!

Indiana 113-125 victory to ease his crisis. Triumph with Doug McDermott as the starter and top scorer of his team (26 points). Myles Turner had 19 points and 10 rebounds, and Aaron Holiday was essential, scoring 13 of his 18 points in the final quarter. It was a good day for the Holidays, as Justin had 15 points. In addition, 18 and 8 assists for Malcolm Brogdon and 14 points, 13 rebounds, and 7 basket passes for a Sabonis who got into foul trouble.

Atlanta continues with heavy casualties: Hunter, Bogdanovic, Rondo, Dunn, and Snell. And he’s in a crisis, on a bad run of results.

Clint Capela was his best man with 24 points and 10 rebounds, while Danilo Gallinari finally worked with 20 points from the substitution. John Collins added 18 points and 9 rebounds, trying to put aside the rumors surrounding him, and Cam Reddish had another 18.

In addition, double-doubles for Trae Young (15 points, 14 assists, and 3 of 9 in the shot), very well in the distribution of the game but sparing in the face of the basket, and Kevin Huerter -10 points and 10 assists.

First game without the injured Mitchell Robinson , and as if nothing. Nerlens Noel came out in his place, the Knicks maintained their excellent defensive level and, in addition, offered a great night in attack to beat with ease.

New York was already winning 63-47 at halftime with choral attack and contribution of their substitutes. In that first half, a single turnover! Quite a piece of information that clearly speaks to how this team has improved in aspects such as concentration and intensity.

The third quarter ended 87-75, and the match ended 121-99 without the local victory in jeopardy.

The hosts had Julius Randle with 22 points and 9 rebounds and rookie Immanuel Quickley shining brilliantly with 22 points in 21 minutes. Plus, 16 points on 23 from the newly acquired Derrick Rose, 15 from Elfrid Payton in 22 minutes, and 11 from rookie Obi Toppin in 15. The New York substitutes scored 58 points!

Houston, without Victor Oladipo and Christian Wood, accumulates with this the fifth loss in a row. The Texan team was below 40% in the shot and was disastrous from the triple with 8 of 43. An argument in attack that contrasted with the fluidity and accuracy of the Knicks, who offered remarkable shooting percentages.