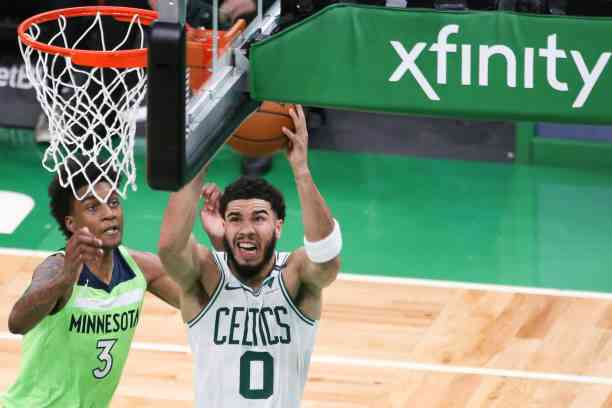 Jayson Tatum was unleashed in a big way to dazzle everyone with an impressive performance crowned with 53 points and his team’s victory. The Celtics suffered to beat Minnesota Timberwolves 145-136 in overtime.

Tatum offered a masterful offensive basketball lesson to finish with 53 points, 10 rebounds, and 4 assists after making 16 of his 25 shots from the field, 6 of his 10 3-point attempts, and 15 of 16 from free range. The forward achieved 18 points in the sum of the last quarter and overtime.

Those 53 points represent Tatum’s personal record in the NBA and place the forward as the youngest player (23 years and 37 days) in his franchise’s history to make a 50-point game, surpassing the legendary Larry Bird.

The last Celtics player who was able to complete a touchdown like this (53 points) was Isaiah Thomas in 2017.

The great star of the game went to rest with 18 points. In the third quarter, it emerged with all its rawness adding 17 more, an explosion that continued in the last quarter and overtime. Tatum’s wild night saved the Celtics from an embarrassing loss.

Boston fell in the first quarter of the game 25-39 after a null exercise in defensive matters, a quarter that served to see the best side of Minnesota (15 of 25 in the field goal) with Karl-Anthony Towns, Anthony Edwards, and Juancho Hernangómez in front and with the team’s substitutes making the difference.

From there, a match against Brad Stevens’ team, which ended up losing by 17 points in the third quarter.

These Celtics are capable of the best and the worst on the same night. It happened again today. Those from Boston came down 17 points in the third quarter, but rallied spectacularly to get ahead (101-100) already playing the last quarter, to present themselves with an 11-point advantage (122-111) with 2:51 left.

Then, when they seemed to have finally solved the equation, they lost their footing again until they saw Minnesota force extra time in a very bad end of the premises and a great outcome of D’Angelo Russell.

Partial 0-10 in less than 2 minutes with D’Angelo Russell as the great protagonist (he made 10 points in the last 3 minutes of regulation time). Russell led the score to 124-124, and Tatum missed his last shot.

Already in overtime, decisive actions by Jaylen Brown, Jayson Tatum, and a Kemba Walker, who hit 2 consecutive triples that were crucial for Boston to open the gap on the scoreboard.

Boston had Brown with 26 points at the end of the game, Marcus Smart with 24 plus 8 assists, and Kemba with 17 and 9 basket passes. The four highest ranked players on the team did not fail.

Minnesota, meanwhile, enjoyed another great performance from Towns. The Dominican had 30 points, 12 rebounds, 7 assists, and 4 triples. It is at an exalted level.

In addition, 26 points and 8 assists in 29 minutes from Russell, who started again from the substitution to play all the match’s decisive minutes. And 24 points from rookie Edwards.

Josh Okogie had 16 points, and 4 steals, and Spanish Juancho Hernangómez had 10 points and 4 rebounds in 19 minutes.

Again, Ricky Rubio was sparing in scoring, having to watch the highlights of the game from the side. He had 4 points, 4 rebounds, 7 assists, and 4 steals without losses in 23 minutes.

Boston, which shone from the triple and returned to accumulate losses and more turnovers, has 4 wins in its last 5 games and is now with a positive record of 27-26.