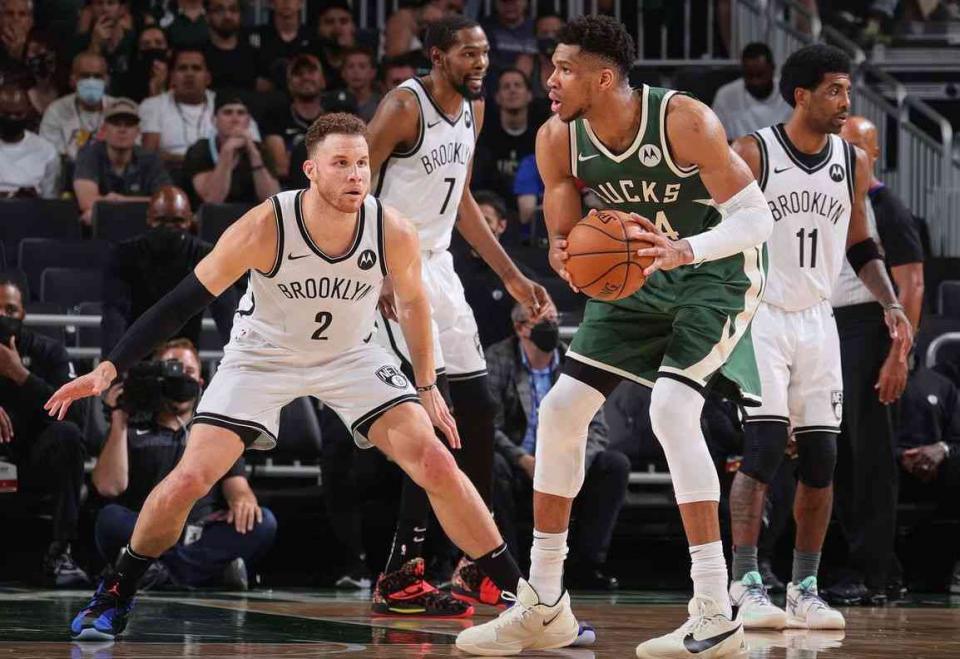 Antetokounmpo in attack and PJ Tucker in defence lead the victory for Milwaukee (107-96). Durant has no help in offence after Irving’s injury in the second quarter.

The Nets-Bucks series has taken a radical turn. From 2-0 emerged from Brooklyn with the Nets victory by 39 points in the second game, it has gone to 2-2 after traveling the duel to Milwaukee, and the Nets are still without James Harden and lost Kyrie Irving this Sunday. Little does he know in these circumstances the recovery for the game of Jeff Green.

Kevin Durant is now the only survivor of the spectacular Brooklyn Nets big three. The Bucks want to assert their theoretical superiority with the current cards on the table.

After the debacle of the second game, Milwaukee has adjusted its defence, has left Brooklyn at 83 and 96 points in the Fiserv Forum games and in this fourth game (107-96) it has improved its performance from the triple and has had the Unquestionable leadership of Giannis Antetokounmpo, who continues, yes, with his particular way of the cross with the free kick.

Anteto led the locals with 34 points and 12 rebounds (14 of 26 in the shot and +29 his team with him in the running), Khris Middleton seconded him with 19 points and 8 assists, Jrue Holiday was growing in the game to help with 14 points and 9 assists and PJ Tucker added 13 points and 7 rebounds, which has its merit, since it was a limpet permanently attached to Kevin Durant, the best visitor with 28 points, 13 rebounds and 5 basket passes, but with 9 25 in the field and 1 of 8 from the triple. Durant finished a bit unhinged by Tucker’s endless defence work, a Tucker who set the Fiserv Forum on fire several times.

Milwaukee’s victory was clear, but there was a game before Kyrie Irving’s injury (midway through the second quarter) and another after Irving had to leave the track not to return.

The first half, including the 6 minutes that Irving could not play in the second quarter, gave us a balanced duel, without great comings and goings, somewhat chaotic in the first quarter, a duel that reached the break with a score of 53-48 (The score was 44-40 when Irving stomped on Anteto’s foot and sprained his right ankle completely, in a very bad way).

The second half was another story, without Irving and with the strange ‘disappearance’ of the game of Blake Griffin, who played 20 minutes in the first half at a very good level on both sides of the court and who only spent 5 minutes on the pitch.

The third quarter left us a blow suffered by PJ Tucker, spectacular his physical display in the game, which did not pass to greater and the pull of the Bucks on the scoreboard thanks to the partnership formed by Jrue Holiday and Giannis Antetokounmpo, a company whose work teacher was the assistance of the base under the legs of Durant for the mate of the Greek (60-50).

The advantage was growing against impotent Nets, a Nets in which only Durant played in attack, since his teammates helped him little or nothing. But not even Durant’s 16 points in this third quarter served the Nets, who ended up losing by 17 points (74-57 after a triple by Bryn Forbes ) and who finished the quarter with 81-69 thanks to the Durant-sponsored reaction.

The last period was the definitive step forward for the Bucks, who took a 19 advantage at the start to give the opposing team no options, while the stands screamed at the top of their lungs, ” Bucks in six, Bucks in six … “.

With 4:28 left, Steve Nash raised the white flag, substituting more substitutes to the court with 99-84 on the scoreboard.

The worst for Brooklyn Nets, seeing that at the end of the game their second best scorer was Kyrie Irving (11 points) after only playing 17 minutes! That said, Durant only with one o’clock, contributed to the fact that Griffin almost did not play in the second half, the gray game of Joe Harris and the lack of success and courage of Mike James, a player prepared for better companies.

Milwaukee leaves its two home games intact – except for the points they had to put Connaughton in the face after being hit in the third quarter. The Bucks returned home with their spirits on the floor and the feeling that the series was very bad looking, and now they go to enemy territory with morale through the roof and the belief that they have a serious opportunity to leave out the Nets.