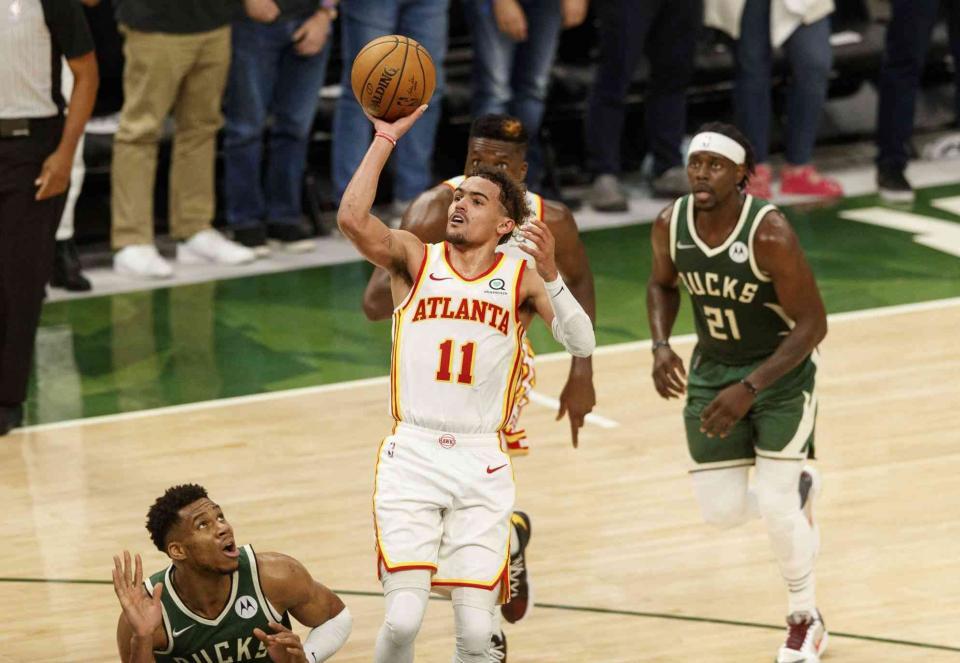 Atlanta prevails 113-116 in a game in which Collins, Anteto, and Holiday also shone. A real unstoppable machine to play basketball. Trae Young’s debut in a conference final was tremendous. Great game by the young point guard to lead his team to a victory in Milwaukee. These Hawks are a team that is willing to go to the extreme.

Trae Young was the balancing factor, the star player who led his team to a 113-116 win in a game that played on tight terms from start to finish, with neither team ever gaining a 10-point lead.

Bucks’ first home loss in these playoffs. Of course, against a team that is almost intractable on the road this postseason, as the Hawks is 6-2 when playing away from home. This team is going well and especially its leader.

Young’s numbers today, historical, worth remembering: 48 points, 11 assists, and 7 rebounds after making 50% of his field goals shooting 34 times. But beyond his numbers was his mastery of the court, his ability to influence the game, his ability to see each and every one of the fissures of the rival defense. And without forgetting the fantasy. Because of fantasy, it was the alley-oop against the board that it carried out with John Collins in the third quarter.

A divine guy this Young, who when ‘clutch time’ almost never disappoints. Young’s pulse did not tremble from close range, when more pressure is felt: 4 free without failure in the last 17 seconds of the match.

Clint Capela did the rest with a formidable offensive rebound that allowed him to score 111-112 with 29.8 seconds left.

At the opposite point, the Bucks, with a definition in which the only correct thing was the 2 free without failure of Giannis Antetokounmpo with 5.3 seconds of the conclusion.

Milwaukee missed half a game due to his inconsistency in closing the rebound in the game’s final stretch. But the worst for those of Budenholzer was in his last attacks, which were a real disaster.

First with a horrible airball from Pat Connaughton’s triple (it did not seem that this player was the one to play it at that moment) and then, in the subsequent play, with the inability to generate a shot of 3 that made the ball stay in Anteto’s hands under the ring to finish in free practice.

Young made it 113-116 from free practice with 4.6 seconds to play, and on the last play Khris Middleton, horrible all night in front of the basket, missed the triple that would have forced extra time.

In the fourth quarter, a 9-0 run with 6 points from Antetokounmpo and a triple from Holiday put it 105-98 on the scoreboard, a moment in which it seemed that Milwaukee could break the game, but it was not. A great flight by John Collins, his great game, and a spectacular 2 + 1 by Young returned equality to the game. And from there to the end.

In a match in which both teams shot poorly by 3, the one with the best finish won, the one who knew better how to dodge the extreme pressure of the last minute.

In addition to the inspired and unstoppable Trae Young, Atlanta had a phenomenal John Collins, author of 23 points, 15 rebounds, and 11 of 16 in the shot. Between him and Clint Capela, they grabbed 34 rebounds, finishing the Swiss with 12 points and 19 sacks on the hoops. Also, 13 points from Kevin Huerter. And let’s not forget that Hawks is without De’Andre Hunter and Cam Reddish, and that Bogdan Bogdanovic is playing with a more than obvious physical limitation.

In Milwaukee, Giannis Antetokounmpo and Jrue Holiday did almost everything. The Greek, who in the fourth quarter signed a good number of alley-oops, finished with 34 points, 12 rebounds, and 9 assists, and this time he went to a remarkable 6 of 8 in free practice. He was very good at sharing the ball and looking for the passing lanes. And Holiday supported his team in the worst moments, especially in the final stretch of the third quarter. He finished with 33 points, 10 assists, and 5 triples. The point guard offered a dazzling performance, but he couldn’t on defense with Young, like PJ Tucker couldn’t and like no one else could.

Also, highlight the very good minutes of Bobby Portis (11 points and 8 rebounds in 15), who had recently disappeared from the Bucks rotation and was signing very poor playoffs.

And on the negative, Khris Middleton. Night to forget that of the forward, who finished with 6 of 23 in the field goal that included a 0 of 9 from the triple.

Ultimately, Nate McMillan and his boys hit first and continue to wreak havoc in the East. These Hawks seem to have no end.

Atlanta Doesn’t Want It. What Will Happen To The NBA All-Star Game In 2021?