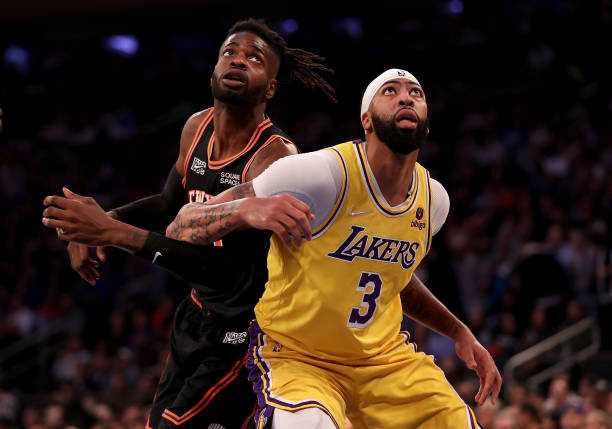 106-100 victory against Lakers without LeBron with Fournier, Randle and Quickley in front. Lakers rally 25 points but lose to 8-9 despite Westbrook’s great game. Knicks and Lakers were capable of the best and the worst throughout the game. Overwhelming start of the premises. They got to put up with the edge 25 of Thibodeau in the second quarter. Lakers brutal comeback. Captained by a huge Russell Westbrook. To get to even the score in the third. But in the end, the locals prevailed. With a great Immanuel Quickley in the final stretch of the meeting. This time another ‘miracle’ like the one in Detroit was not possible.

New York (10-8 now) had a special trio in the win. Formed by Evan Fournier, Julius Randle and Quickley. The Frenchman scored 26 points on a happy night from the triple. The All-Star went to 20 points, 16 rebounds and 5 assists. But he was sitting for much of the last quarter because of fouls. And the young Quickley added 14 points and 4 triples after a great last quarter. He made 12 of his 14 points in the last period.

Knicks had 6 players on 10 or more points. With a special mention for alternates Toppin and Burks. The locals played without Derrick Rose, Mitchell Robinson and Taj Gibson.

The Laker’s big loss was well known. LeBron James did not play due to suspension. And his team lost to be negative for the first time this season (8-9). You could see the team’s trajectory coming. Incapable of the Angelenos to date to resolve their matches on the fast track. And also unable to assert their quality against inferior teams.

It was not the case today. These Knicks are not the Pistons or the Rockets or the Thunder. It’s a well-armed team since Thibodeau arrived. And that’s how they showed themselves in the first part of the game. Especially in a first quarter in which they rolled the Lakers triple by triple. And with defense. Although then they faltered and were at the mercy of some very good Lakers.

The Lakers were worth little in the end with their tremendous defensive improvement after the break. After starring in an unfortunate first quarter in that section. And Russell Westbrook’s great game was also of little use. Yes, Russ played an excellent match. After losing 5 balls in the first half, he only lost 1 in the second. His third-quarter was anthological: 18 points with 7 of 10 in the shot, 3 assists and only one loss. Westbrook sustained his team throughout the second half. And he finished with a true triple-double: 31 points, 13 rebounds and 10 assists. With good shooting percentages and positive descent over his teammates. But there were others who were not up to the task.

They were not, especially, Carmelo Anthony and Talen Horton-Tucker. The first finished with 3 of 14 in the shot. The second seems to have suddenly forgotten to play basketball. Today, 0 points with 0 out of 8 in the shot. And another who doesn’t raise the bar night after night is Dwight Howard. Suffice it to say, DeAndre Jordan was much more than Howard. The comparison is already painful. Anthony Davis was in a middle line. Neither fu nor fa. He added 20 points and 6 rebounds. In his defense, it must be said that he played ill.

On the bright side, the great performance of Avery Bradley. On both sides of the court. And the first part of Malik Monk. Although then, it was turned off.

The party had several parties within it. But one thing in common: Lakers were never ahead on the scoreboard. Of course, the comeback of the Angelenos was brutal. From -25 to equal.

Knicks were already 21 points ahead (36-15), still playing the first quarter! Catastrophic start of the Lakers game. Fournier, Randle, and Barrett were abusing Vogel’s non-existent defense. At the end of the first quarter: 36-20. With Knicks having hit 7 triples. The Lakers’ perimeter defense was on vacation for another day.

The Lakers bloodletting was growing in the second quarter. Until it is very worrying. Knicks got 25 points up (54-29). The bathroom was spectacular. But it was there that the Lakers realized that he was heading for a hideous ridicule. And reacted. They began to defend the Angelenos. New Yorkers began to falter. Davis’ best minutes. Avery Bradley looked very good. From losing by 25 to being 10. And the break was reached with 63-51. He had still left.

The comeback continued in the third quarter. They were minutes under the omnipotent reign of Westbrook. Brutal the base. Partial 4-25 between the end of the second quarter and the start of the third. And 63-60 in the light after a Davis dunk. And the Lakers fared even better as the Knicks waned and Westbrook exploded. Tie at 79 after a dunk from Carmelo. From -25 to 0! But the Lakers were never able to take the lead. And there was the key.

The Laker’s defense had finally become defense. The doubts had permeated the Knicks. And the last quarter was entered with changed tendencies: locals on the downside, visitors on the rise.

However, the trends were broken. It is true that the Lakers did not lower their guard on defense. But it is no less true that it stalled in the attack. New York returned to its most intense personality: work in the rear. And young people emerged. Quickley and Toppin were undaunted. The triples of the first ended up killing the Lakers. Angelenos kept surviving because Russ had his day. But the cards were already face up. The team that had dominated the score for 48 minutes would end up winning.