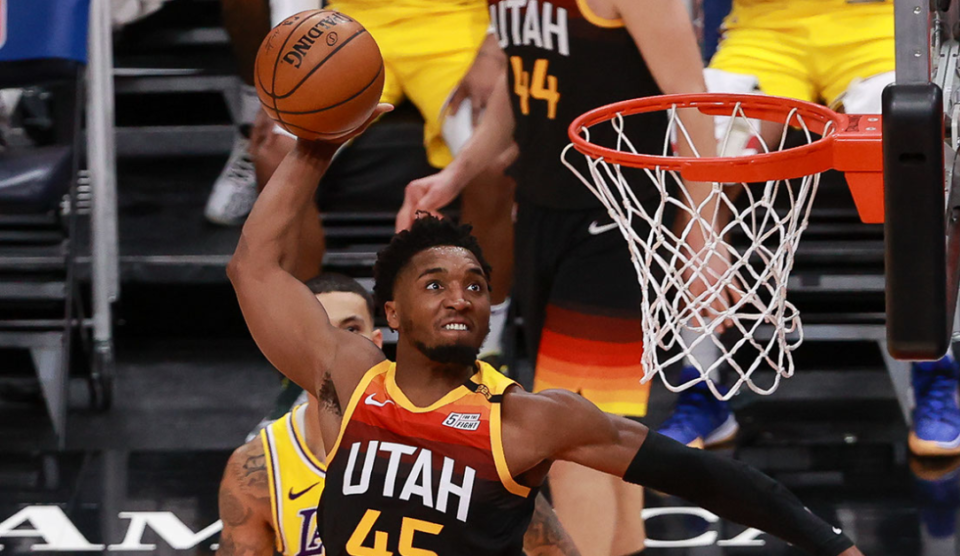 Jazz, Blazers and Knicks sweep by beating Orlando, OKC, and Detroit by more than 40 points.

The NBA competition begins to devalue at times, and the show suffers. We came from a historic beating by the Raptors to Warriors in the previous day, and in this, we have had 3 games resolved by more than 40 points difference. A competitive rampage.

Utah Jazz beat the Orlando Magic (137-91) by 46 points and incidentally broke a historic NBA record by scoring 18 triples in the first half, something that no team had ever achieved.

The 3 games agreed on something: there was no competition. All were resolved in the first quarter. A very bad image for the league.

After the transfers in March, the Orlando Magic have been like a patchwork team, but they seemed to be defending themselves with a lot of dignity. What’s more, he was surprising locals and strangers despite having a complicated schedule. The Magic came to make the Lakers suffer and beat the Clippers in a double session at Staples and beat the Pelicans in New Orleans, but today they have paid for those efforts, and the Utah Jazz has been too much for them.

At halftime, Donovan Mitchell already had 22 points after making 6 3s of 7 attempts, and his team had signed 18 3s of 31 shots. No one in NBA history has made that many 3s in one half. Meanwhile, his rival had 2 of 12 from the line of 3.

The game was not very edifying. A great team measuring itself against a real mediocrity. The locals have walked in the first half and have not had to make an effort in the second. Jazz finished with 26 triples scored and a 55.4% accuracy in the field goal. Up to 10 of the 13 players who jumped onto the court for Jazz scored at least one triple.

Faced with the local bombardment from the triple, OKC opposed a series of 2 of 23 from beyond the arc and 36.8% from the field goal. Wendell Carter Jr. started this time with 19 points, and 12 rebounds, and rookie Chuma Okeke finished with 16 points.

Another game finished before almost starting. Portland won by ultra-fast track: 35-19 in the first quarter. And in case there were doubts, a tremendous partial of 39-13 in the third. An abyss between teams that allowed the starters to rest a lot and that the substitutes of both squads enjoyed minutes.

In fact, Portland had 8 players in double-digit scoring, and … 5 were substitute players! The second local unit scored 68 points.

The game had little competitive tone. Those of Stotts left of the third quarter winning 104-59. The figures say it all.

Portland, who was 52 points up, had CJ McCollum with 20 points, Damian Lillard with 16 plus 6 assists, Anfernee Simons with 16, Norman Powell with 15, and Enes Kanter with 12 points and 17 rebounds.

With 52 points from his substitutes, Thunder had top scorer Kenneth Williams , who scored 18 points. Newcomer Tony Bradley had 14 plus 8 rebounds, and Moses Brown completed a double-double.

Meanwhile, rookie Theo Maledon, who had just scored 33 points, stayed at 7 with a 1-for-12 shooting.

Tom Thibodeau’s military walk did not lower the piston after the break, endorsing Detroit a 40-65 in the second half.

The Knicks haven’t won a game by that many points since 1996.

The only positive for the Pistons is that he recovered rookie Killian Hayes, who had been injured for quite some time. Of course, Hayes did not score in the 20 minutes he stepped onto the court. He was seen as lost as the rest of his companions.