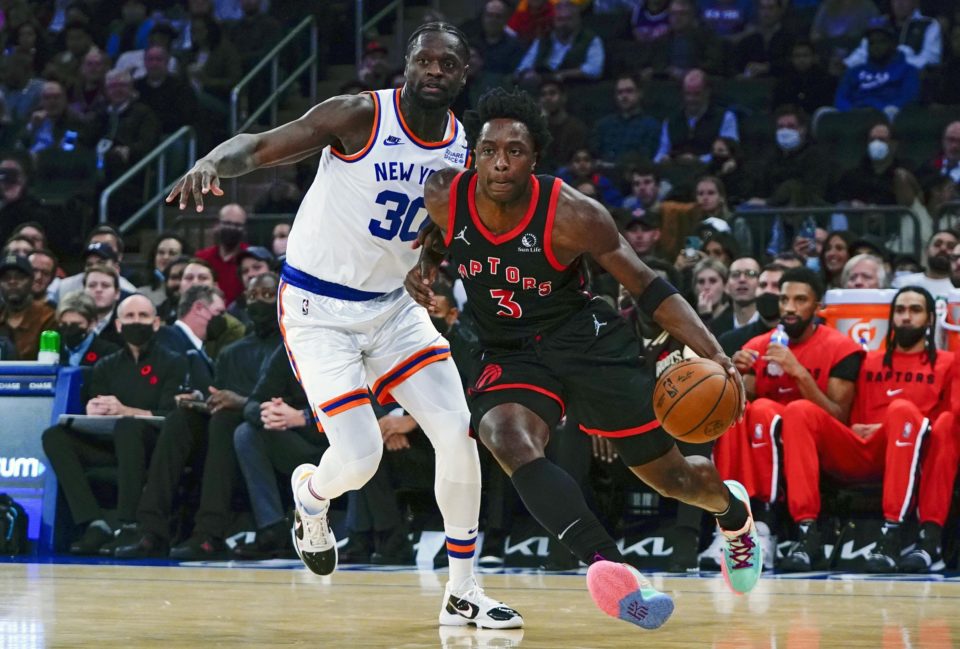 Raptors chain their fourth consecutive victory with a stellar Anunoby.

The Toronto Raptors were used to playing away from home. So it consumed the whole of last season. Perhaps that is why his start to the season as a visitor is so dazzling. New victory away from home (3-0 as Toronto foreigner) to reach an unexpected 5-3 mark after winning 4 games in a row.

This was not a normal encounter. It was a great reunion. Because today the NBA celebrated its 75th anniversary by reissuing the game that started it on November 1, 1946. That day the New York Knicks played against the Toronto Huskies at Maple Leaf Gardens. Yes, because the NBA started in Canada.

Today, the league gave a little twist to history for the game to take over the great light of New York, and the result was the opposite. If the Knicks won that November 1, 1946 by 66-68, today they have lost at Madison by 104-113 in a surprising way.

These Raptors are leaving everyone quite stunned with their start. Nick Nurse is expressing a very talented squad with Pascal Siakam missing and the team’s great young sensation, rookie Scottie Barnes, missing tonight. And despite all this, Toronto has won.

He has done it with a dazzling OG Anunoby. The forward has made the best score of his NBA career with 36 points, accompanied by 6 rebounds.

In addition, 26 points and 4 steals from Gary Trent Jr., 17 points from Fred VanVleet, who has flirted with the triple-double, and 15 points from Svi Mykhailiuk, who has started in place of Barnes.

The key to the game has been in the third quarter. The game had reached its intermission with 57-53 in favor of a Knicks led by Julius Randle. But the continuation has been tough for the home team, who have conceded 22-38 in the third quarter (those 38 points will have done damage in Thibodeau’s eyes ), the moment in which the trend of the match has changed.

A nurse started Khem Birch in the third quarter instead of Precious Achiuwa, and hasn’t made a single change in the entire third quarter! Something rare in the NBA. The truth is that it has worked well to give continuity to some headlines that have embroidered it in that third act.

The Canadian team has managed to stop Randle in the second half, hurt from points from rival losses, run very well backwards, barely allowing points to the Knicks counterattack, worked the rebound well, and managed to hold on the scoreboard after breaking it in the third quarter.

Knicks have had RJ Barrett with 27 points, Randle with 22 and 9 rebounds, and Kemba Walker, very off in the first half, with 15 points. But neither the Knicks defense has been the defense to which we are accustomed, nor have players like Fournier, Rose or Quickley worked in the attack.

To all this has been added the injury of Taj Gibson, who has suffered a sprained ankle.

Faced with some Knicks still in a very good balance (5-2), Toronto, which has lost half as many balls as its rival tonight, appears to be in surprisingly good health. At least at this start of the competition.