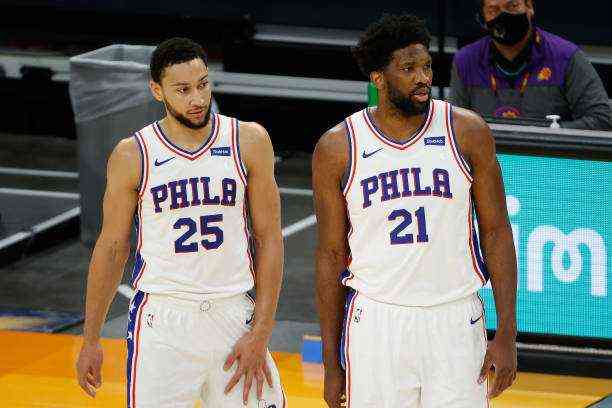 Towns and Edwards lead the Timberwolves without Ricky Rubio and Malik Beasley.

Dominican Karl-Anthony Towns snuck in every way to return to the game of the recovered Joel Embiid. The Cameroonian returned to the competition after missing 10 games due to a bone contusion in his left knee.

The 3,071 spectators who gathered in the Sixers’ pavilion were very clear about their behavior: chants of “MVP, MVP …” for their idol Embiid since he began to warm up and boos for Towns in the presentations and when he touched the ball. The match between these two players is already becoming an NBA classic, and again it did not disappoint.

Towns had a great game and finished with 39 points, 14 rebounds, and 5 assists, and 4 triples after spending 44 minutes on the court. And incidentally, he had his pluses and minuses with the Cameroonian genius.

The Wolves star had the luxury of hitting Embiid in the face in the second quarter with a gesture of celebration, and in that same quarter Embiid returned the play with a 2 + 1 circus player with a foul by the Dominican, a move also celebrated against the look of the rival.

Later came the small tensions. Towns foul that Embiid did not like, to later make Embiid a very ugly foul to Towns that was not considered flagrant and that was not reviewed due to the annoyance of visiting coach Chris Finch.

Beyond piques and basketball sauces, Embiid returned to the courts in very good condition, confessing after the game that he felt ” phenomenal .” He had 24 points, 8 rebounds and 3 blocks in 29 minutes of action, went 17 times to the free line, and his team signed a +20 with him on the court.

The Sixers center played the entire game with his left knee heavily protected, and when he was switched he sat in a separate chair that gave the player an air of meditation.

Philadelphia had to work diligently to win in a great game for Tobias Harris, who finished with 32 points after making 13 of his 17 shots from the field.

Ben Simmons had 14 points, 8 rebounds and 6 assists, and both Shake Milton and Seth Curry worked together in attack to put the Sixers with a 34-15 record, tied in the first position of the East with the Nets, both in conflict with the Bucks, which is behind with 32-17. They are the big three coconuts of the conference.

Minnesota completed a very good game and fought to the end. It has the worst record in the league (12-38), but at least it competes, not like other teams that are at the bottom of the table and that are already dedicated to anything but competing.

The visitors played without Ricky Rubio (second game lost due to his back) and without Malik Beasley. Two weight losses that they dodged well.

In addition to Towns, another notable game from rookie Anthony Edwards , who sinned by being ungenerous. Despite this, young Edwards was doing very well with 27 points in 41 minutes. Starters McDaniels and McLaughlin had 14 points, and 8 rebounds and 12 points, 9 assists, and 3 steals, respectively. And the Spanish Juancho Hernangómez played 2 testimonial minutes that they did not give him at all.