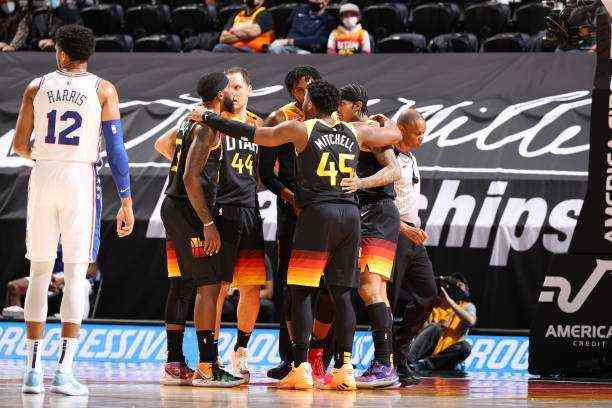 Hellish rhythm of these Utah Jazz, an unstoppable team whose offense eats up one rival after another and whose defense makes the difference when it is necessary to mark them. Win against a very polished Sixers despite not having Joel Embiid. Victory to get 23-5. The Jazz has won 19 of their last 20 games!

They are, today, the best team in the NBA by game and by results. Their consistency is maximum, and their versatility, extreme, and it is that consistency and versatility that give them a thousand ways to win games.

Today, against the Sixers, they won even though Ben Simmons and Tobias Harris multiplied to make up for Embiid’s loss. Simmons had his best offensive game since he was in the NBA, and Harris was not far behind. Between the two of them, 78 points were insufficient to win!

Jazz cared little about that. At the same time, it mattered little to him that Snyder’s team returned to play without Mike Conley, that Rudy Gobert offered a second-level game, that Donovan Mitchell -24 points with 9 of 24 in the shot- did not have his best day in shooting or that Bojan Bogdanovic didn’t hit a single triple, finishing 0-of-6 from long range.

It made up for the team play, the good performance of Joe Ingles (20 points), the tremendous game of Jordan Clarkson, and the fantastic finish of Royce O’Neal.

The Jordan Clarkson thing was tremendous. His start of the game was already a declaration of intent. He started from his usual substitution, and in his first 3 minutes of play, he had already nailed 4 triples to the Sixers! Clarkson was a real machine gun that tore apart the rival defense. At halftime, he already had 19 points, and the end of the match added 40.

Clarkson finished with those 40 points after hitting 8 3s and equaling a Jazz player’s 3-point record in a game.

O’Neale spent the game defending and depriving himself of the offense until it came to the point of the game where the baskets were worth gold. Then it emerged. Down the stretch, he made 3 triples and served an alley-oop assist for Gobert. It was O’Neale who ultimately showed the Sixers the path to defeat.

The Sixers couldn’t defend against the Jazz. The abysmal difference between the second units, caused mainly by Clarkson’s explosion, left the productivity of both very unbalanced: 57 points for the local substitutes and 25 for the visitors, with Dwight Howard as the best substitute for Sixers (14 points and 12 rebounds).

His good offense and his positive work on the boards were of no use to the Sixers. Tobias Harris’s 36 points and 10 rebounds and Ben Simmons’ outsized performance were worth nothing. Wild the Australian, who was very aggressive facing the basket.

Simmons beat his NBA scoring record with 42 points, but also grabbed 9 rebounds and dished out 12 assists. He had 19 points in the first quarter, his highest score in a quarter since entering the league. Demolisher Simmons, Demolisher.

Meanwhile, Utah finished with winning percentages: over 50% in the field shooting, 18 triples with 40% effectiveness, 83.9% in free practice, and 134 points scored. A frantic rate of annotation losing 11 balls, a very reasonable number of losses considering the team’s level of offensive demand.

Sixers started with a shorter and more open team by starting Mike Scott in place of the absent Embiid. But Mike Scott painted little or nothing at the game. So Rivers needed more minutes from Dwight Howard, which worked really well.

After 35-42 in the first quarter, with Simmons and Harris scoring 33 points !, Utah began to defend in the second act, and there they started the advantage of the Salt Lake City team on the scoreboard, from defending better, leaving at halftime winning 72-66 (Utah conceded 24 points in the second quarter) and finishing the third quarter 106-94.