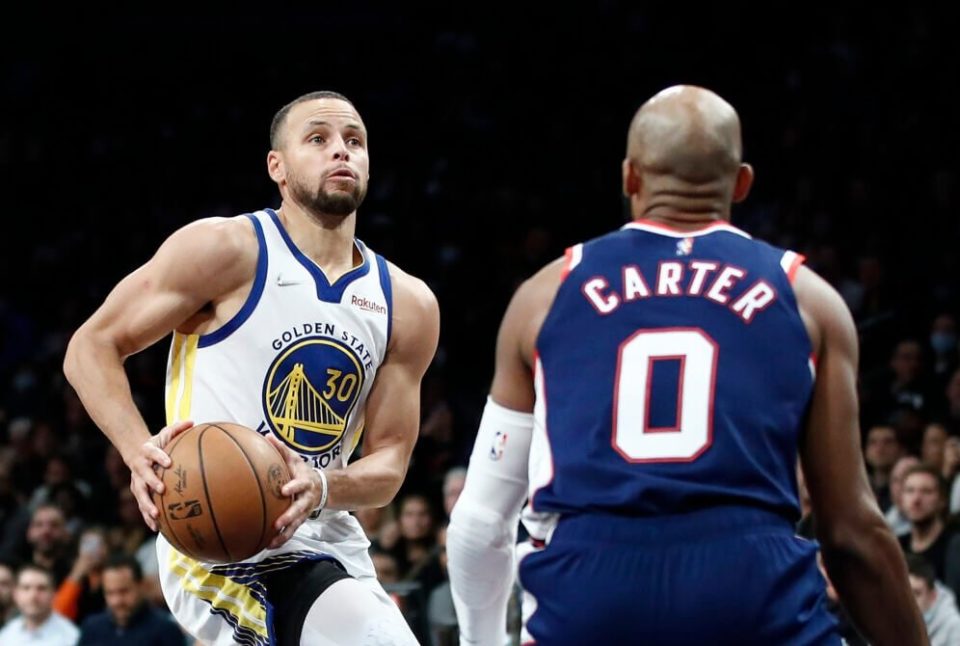 Curry scores 37 points, and Durant gets stuck in attack in the second half. Golden State decides the game with Curry and Wiggins on the wing due to foul problems.

Fantastic display of play by the Golden State Warriors in Brooklyn with Steve Kerr’s team knocking Steve Nash off the court in the third quarter despite foul trouble by their two best gunners, Stephen Curry and Andrew Wiggins.

Away triumph by 99-117 with 37 points and 9 triples from Curry in just 29 minutes, and with very good shooting percentages, 19 points in 22 minutes from Wiggins, 17 from Jordan Poole despite his denied night from the triple and 11 points, 6 rebounds and 8 assists from the almost always essential Draymond Green.

And once again Golden State with a commendable job from its second unit, with a first-rate hard core in the figures of Andre Iguodala, Otto Porter Jr. , Gary Payton II and Damion Lee.

The Mexican Toscano-Anderson played 5 minutes, when everything was already decided.

The Nets played without Joe Harris and Paul Millsap, joining Irving’s familiar casualty, and started Patty Mills. James Harden had 24 points, going to free practice 11 times, Kevin Durant had 19 (just 7 in the middle two quarters!), Finishing with an unsuspected 6 of 19 on the shot, and Bruce Brown added 14 points and 3 steals.

Warriors emphatically beat the Nets from a fantastic third quarter (18-35). The San Francisco team defended at a very good level, dominated the rebound throughout the game, had a remarkable substitution, blurred Kevin Durant’s attack to unsuspected limits (0 of 8 in the shot in the third quarter), and did not falter at the most delicate moment of the game, when he was winning comfortably in the third set and had to send Wiggins (at 9:03 to finish the fourth) and Curry (at 7 minutes) after both getting into foul trouble.

At that point, I step in front of Draymond Green and Jordan Poole and second-unit players who are in wonderful shape. And defense, movement of the ball, undeniable dominance of the rebound, running when he played … a nightmare for the Nets, who conceded a 0-8 just after the break (58-71) and a 5-18 to lose 70- 91, culminating the third quarter with a triple on the horn of Iguodala that put the maximum advantage until then on the scoreboard: 76-98.

Brooklyn was not Brooklyn. Durant did not stop missing shots in front of the demanding visiting defense, Nash took LaMarcus Aldridge out very late in the rotation, who barely played 9 minutes and took part of the game when Nets were already desperate, and the home defense in the third quarter disappeared definitely off the map, with Warriors making quite a few easy baskets.

The clearest example of the state of affairs came when, with 68-84 on the scoreboard, the Nets asked to review a foul by Durant against Gary Payton II, clearly evident, with Durant fouling the attacker first with one hand and then with the other. . It seemed like a bad joke to ask for that review, but it was requested.

With Curry and Wiggins back on track, the start of the final quarter was the final touchdown for a surrendered Nets. A block from Otto Porter Jr., a triple from Curry from home, and a 2 + 1 from Lee put the 80-107 on the scoreboard, a +27 that led Nash to take the court to his very deep bottom of the closet when there were still 9 minutes to go.

Before, we had witnessed a beautiful first quarter, an initial quarter with a lot of offensive success and equality, with excellent movement of the ball by both teams, with a beautiful duel between Durant and Curry, who scored 2 triples in a row, the house brand … and a second quarter in which the Warriors increased their defensive work, in which rookie Kuminga put a sovereign stopper on Harden, in which Porter Jr. did damage to the Nets and in which Andrew Wiggins woke up after not scoring in the first fourth, as he made 13 in the second including a final triple over the horn for 58-63 at halftime.

Then came the aforementioned: total superiority of a very convincing Warriors against a completely blurred Nets.

The Californians are behind the victory with a 12-2 record and leave the New Yorkers at 10-5.

Knicks Win In Dallas With Randle Showing off In His Hometown