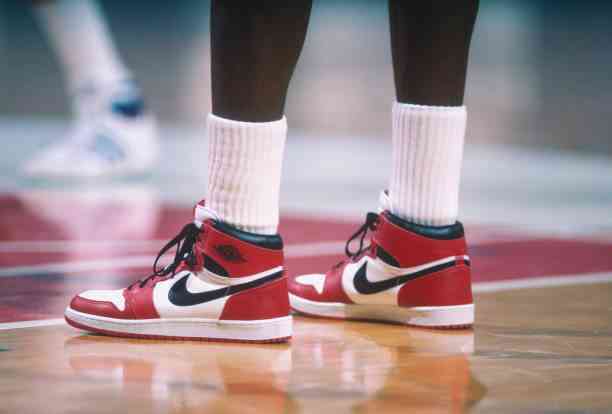 The classic Air Jordans are not the best-selling sneakers at auction, in fact, the most expensive ones went for triple the money.

Definitely, the world of sports has become a business, sportswear is so common in people’s daily clothing that brands have taken the opportunity to launch product after product, such as Nike and Michael Jordan with their Air Jordan.

Every time we can find new reissues of the famous Air Jordan, which was initially made exclusively for Michael Jordan, and that, due to its success, any of us can buy, of course, if we have a few thousand extra pesos left in our wallets.

Since 1985, the Air Jordan has become a distinctive sign of the Nike brand and not only by basketball fans, but by the vast majority of sports fans have or would like one, but also pop culture has done the same, that even some musicians have their own Air Jordan model.

Rapper Travis Scott has not one, but several Air Force models to his name, and they are not cheap at all, in case they decide to look for them for their collection, but also other brands such as PlayStation have joined Travis and Nike to release their own model of shoes.

Which athletic shoes were the most expensive at auction?

You might think that Michael Jordan and his countless shoe models could be the most expensive ever sold at auction, but they are not, in fact, the best-selling model comes from a rapper and is not Travis Scott, although his shoes are also a gem.

Although yes, Michael Jordan had the record with some shoes that he used and we mean the original Air Jordan in red and white, which were the first Air Jordan used by Michael with the Chicago Bulls, those were sold for 615 thousand dollars, according to Robb Report.

But according to the auction site Shotesby’s, Nike shoes from 2008 are the highest priced at auction. In 2020, the Yeezy One by Nike created for Kanye West, which he wore at the 2008 Grammy Awards.

Those shoes reached the amount of 1 million 800 thousand dollars in an auction, it is crazy, we know, but when you have money, you can give yourself certain luxuries or not. Although the initial offer was $ 1 million, the price at which they were sold was the maximum offer that the shoes reached, a Guinness record.

The right auction world for the Air Jordan brand

Most likely, the new generations have not been able to see Michael Jordan play, but they have heard about him from the media, their older relatives, or because of his interest in sports, but also because the sneakers he used will never go out of style.

Pop culture characters continue to use their models and some reissues that Nike has put on the market, but having one of the newly made models is not the same as having one of the old models, in some cases, the first editions will always be better or even some used by Michael Jordan.

That is why some auction houses that have these items do their August for nostalgia, and one example of them is Christie’s, who had some highly sought after Air Jordan models up for auction, either individually or by package.

The Air Jordan models 1 to 14, a fairly complete collection, went for 60 thousand dollars, a reasonable price – for those who can afford it and are not saving – for 14 different Michael Jordan models, individually, the Air Jordan 1 High “Colette,” Friends & Family Exclusive from 2017 went for $ 17,500.

But not everything is hitting left and right; there were some pretty decent auctions in terms of the price at which sneakers like Ray Allen’s exclusive Air Jordan 23 went for $ 6,250. We pass the information on in case you have money left over, and you want Air Jordans.

Kevin Garnett Blows Up With NBA Stars Of The 90s: ‘They Couldn’t Play These Days’

Tatum Scores 53 Points And Boston Wins In Overtime At Minnesota