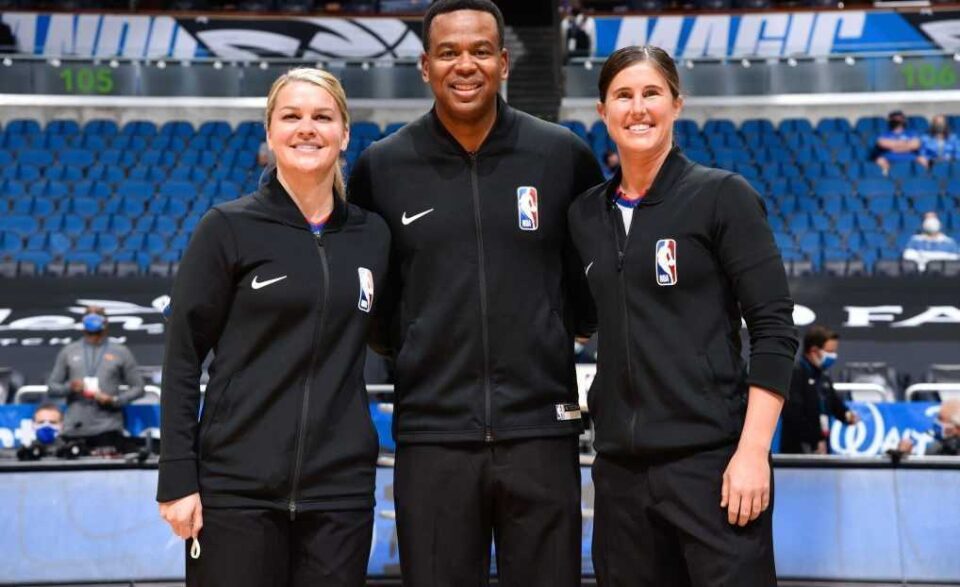 So far this season, the NBA has used 76 whistlers, of which 7 are women: Sago, Schroeder, Lauren Holtkamp-Sterling, Ashley Moyer-Gleich, Simone Jelks, Danielle Scott, and Dannica Mosher. This is the highest number on record in a professional basketball campaign.

These referees’ teamwork came amid the excitement of seeing the first woman on a Super Bowl referees corps. Sarah Thomas will set a very important precedent in the NFL in pursuit of gender equality.

She was born on May 24, 1989, in St. Louis, Missouri, and there she studied at the University. Natalie Sago combined studies with sports, graduating with a Bachelor of Physical Education K-12, while playing softball for Jefferson College between 2007 and 2009.

Sago began his refereeing career at the collegiate level in his hometown and later joined the NBA G League and the WNBA. In fact, in the Development League, she also shared the court with Jenna Schroeder.

The NBA announced that Natalie Sago would be promoted to full-time whistler on November 15, 2018, alongside Mousa Dagher, Ashley Moyer-Gleich, Matt Myers, and Phenizee Ransom.

Before the game that ended 117-108 for the Orlando Magic, Sago was proud to make professional basketball history and highlighted the work of the NBA .

“I am proud to be part of an organization that considers people to work based on their abilities, not their gender, race, ethnicity, and that kind of thing,” she told the League.

Who is Jenna Schroeder?

We are talking about the fourth woman to join the referees in NBA history. Schroeder was born in Flint, Michigan, graduated from Clio High School, and at the age of 35, boasts a great career in this discipline.

She studied Communication in Saginaw Valley and was also a basketball player at Oakland University. She spent three seasons in the NBA G League, with playoff appearances, and two in the WNBA. In addition, she trained as a whistler for 7 years in college games.

Jenna Schroeder was promoted to the NBA in October 2019, but remained in the Development League to fulfill the four years of experience required by the regulations.

“This is a big thing. It’s as if my feminist dreams come true, my personal values ​​match my professional values ​​, and it’s something incredible, “she said before going out on the court with Sago and Wright.