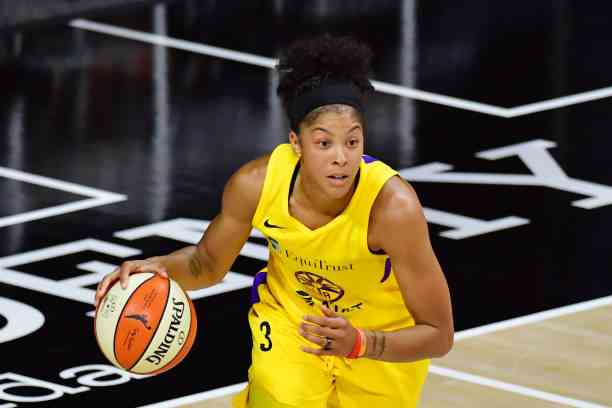 The cover of the NBA 2K22 video game was unveiled, and one of the surprises was that Candace Parker will be the first woman to appear.

We are at that time of year when video game fans are more than happy, since several of the sports installments for this year – yes, friends who are not familiar with video games, each year there is a new one – are already being discovered the covers and Candace Parker took the spotlight.

Little by little, sports video games are including women in their game modes. The FIFA video game was one of the first to do so, with Alex Morgan on the cover for the 2016 edition, which included the women’s teams from some countries.

NBA 2K22 is the basketball video game that will arrive for different platforms such as Play Station, Nintendo, and Xbox this September 10, 2021. Candace Parker will be one of the covers of the 3 different editions that the video game will have.

Luka Doncic will be the cover of the standard edition of the video game, but Candace Parker was chosen for the commemorative edition of the 25 years of the WNBA. For the 75th anniversary of the NBA, one more edition has Kevin Durant, Dirk Nowitzki, and Kareem Abdul-Jabbar as protagonists.

“Extremely proud and humbled to be the first female cover athlete in NBA2k history. I am honored to work with a company that is investing in women and betting on us to be successful. I am hopeful that there are many more badass women to follow, “Candace Parker said on her Twitter account.

Who is Candace Parker?

Candace Parker is currently 35 and plays for the WNBA’s Chicago Sky, but 2008 was the year she made it to the league thanks to the Los Angeles Sparks. Forward and sometimes center on the floor, she is one of the most dominant players in the league.

But before having a successful career, Candace Parker in her time as a university already warned that she would become a star. She won 2 consecutive national championships with the University of Tennessee. Already in professionalism, she has achieved it all, including a pair of Olympic gold medals in Beijing 2008 and London 2012.

Her career as a professional basketball player has taken her to play in the WNBA and all over the world. She went to Russia to play for UMMC Ekaterinburg, then she went to China twice, first with Guangdong Vermilion Birds and then with Xinjiang Tianshan Deers.

In the WNBA, she has only been with 2 teams, the Los Angeles Sparks, with whom she achieved absolutely everything. In 2016 he won the franchise’s first title since 2002, earned the MVP award for two seasons, a Finals MVP in 2016, and a WNBA All-Star Game MVP in 2013.

Also, she was Rookie of the Year in 2008, the year she made it to the league. Candace Parker has been selected 6 times as All-WNBA – that is, the best players in the league each season – and 5 times to the All-Star game. Additionally, she was the first player to win the league’s rookie of the year and MVP award in the same season.

As if Candace Parker’s career was shortly lacking, in Russia, she also won everything. 4 Russian championships, 4 Russian cups, a Euroleague championship in 2013, and she was the MVP of the final-eight of the Euroleague in 2013. So she has the merits to be the first woman on the cover of NBA2K22.