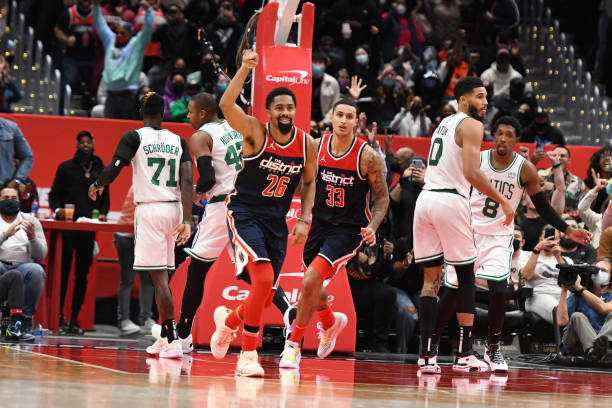 Celtics lose a double win chance on shots from Brown and Tatum. Washington goes 5-1 as the Celtics lose the second overtime game.

Boston Celtics third game settled beyond regulation time and second loss in such conditions. This time there was double overtime, with the victory falling to the Washington Wizards side (115-112).

Up to two times, Boston had the game in their hands. At the end of the fourth quarter, with a score of 103-103, the Celtics had 3 seconds to take the victory, but Jaylen Brown’s long distance shot hit the rim; and at the conclusion of the first overtime, with 109-109 in the light, Jayson Tatum shot to the basket to win, but his forced shot never had a chance to enjoy success.

The visitors had gotten to put 103-109 in the first extension, but then they ran aground in attack.

Already in the second overtime, Tatum was not at all lucky in the end, and the Wizards resolved with a basket from Bradley Beal (113-112) and another from Spencer Dinwiddie (115-112 with 20.6 seconds left).

Celtics looked for the tie in the last play, but it was a real disaster in its execution. Tatum, who shortly before had missed a shot and had lost a ball, was at the limit of taking steps, they were claimed as such, and seconds later, in the same play, Kentavious Caldwell-Pope emerged, keeping the ball when Jaylen Brown was looking for the triple the tie.

These Wizards promise. The team of Wes Unseld Jr. is now 5-1 in the standings despite not having much of its interior arsenal ( Daniel Gafford, Rui Hachimura, and Thomas Bryant are out).

Beal led the win with 36 points (12 of 32 on the shot), and Dinwiddie added 20 points and 9 rebounds (6 of 18 on the shot), making the 3 players from the Lakers essential again. Montrezl Harrell signed his third consecutive game of 20-10. This time, 20 points and 14 rebounds before being eliminated for his sixth foul in the second overtime. Kyle Kuzma had 17 points and 17 rebounds (his best rebounding mark in the NBA). And Kentavious Caldwell-Pope snatched the last ball from Brown, sealing his victory.

The Celtics (2-4 mark) lived a real nightmare from the triple: 2 of 26 was their series after making 0 of 15 in the first half! Saturday to forget from the long distance.

Boston played without Marcus Smart, Robert Williams III, and Romeo Langford. Jaylen Brown had 34 points, Tatum added 27 plus 15 rebounds, but with 10 of 32 on the shot, and Josh Richardson shone from the substitution with 18 points. Bad Dennis Schröder.

Among ours, Juancho Hernangomez did not play and Al Horford returned to offer a great performance, author of 8 points, 10 rebounds, 6 blocks, and 5 assists in 41 minutes.

Like A King! Epic Games Presented The Arrival Of Lebron James To Fortnite