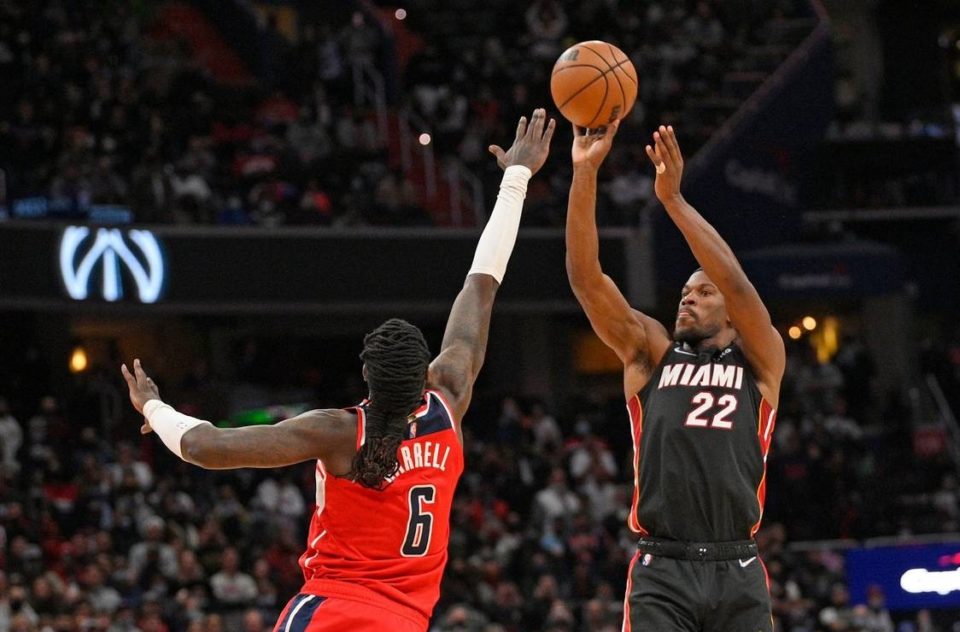 Beal leads the scoring but Dinwiddie and Caldwell-Pope are the decisive ones. Miami can’t reissue Thursday’s win despite 29 points from Jimmy Butler.

Everything pointed to Miami winning again over Washington. On Thursday, he had already done it and today he was on his way to do it. He was dominating 84-94 with less than 5 minutes to play. But at that moment everything changed. The game took a spectacular turn.

With 84-94 in the light … 15-2 partial from the locals to put the score at 99-96 with 1:43 left! With two exclusive leads in that set: Spencer Dinwiddie and Kentavious Caldwell-Pope.

Bradley Beal was the best of the Wizards during the game. He had 21 points and 9 assists. Although he was unlucky from the triple. But the two players who broke Washington’s losing trend were Dinwiddie and KCP. The two finished with 16 points. And between the two they made 9 triples of 15 attempts.

The other major player at the end was Kyle Kuzma. Invisible in attack throughout the game. He only got one field basket in the whole night. But he wanted the game to end by deciding the duel from free practice. He got 4 transcendentals with 34.1 and 12.4 seconds from the end. And with 103-100, he missed the 2 finals. There was half a second left and everything was decided. Or so it seemed. Because after missing the second free play, a miracle almost happened. At 103-100, Bam Adebayo captured the rebound and … Bam! … triple attempt from rim to rim. Across the entire court. Thrown over the horn. And the ball crashed into the rim.

The Wizards breathed after seeing how the ball did not enter. Cold sweats in a stand that already celebrated the triumph. A win that puts the Wizards (11-5 and 7-1 at home) ahead of the Heat (11-6). Miami had 4 consecutive victories.

Washington was 16 points behind in the third quarter. But he never gave up.

The capital team saved some important burdens. For example, in the first quarter, the Wizards lost 7 balls (19 throughout the game). The game came 41-43 at halftime after a horrific second quarter. Miami was a short lead despite being 1-of-14 from the 3-pointer.

After falling by just 3 points, the Heat will remember a play. Of the 3 free games, the team gave it to Bradley Beal in the last second of the third quarter.

Miami offered a null performance from triple. He had a gray Kyle Lowry. And he did not know how to play the end of the game.

Another fantastic performance by Jimmy Butler was of no use. It is coming off. Today, 29 points. Tyler Herro had 20. Adebayo had 15 after being in foul trouble. And PJ Tucker added 14.