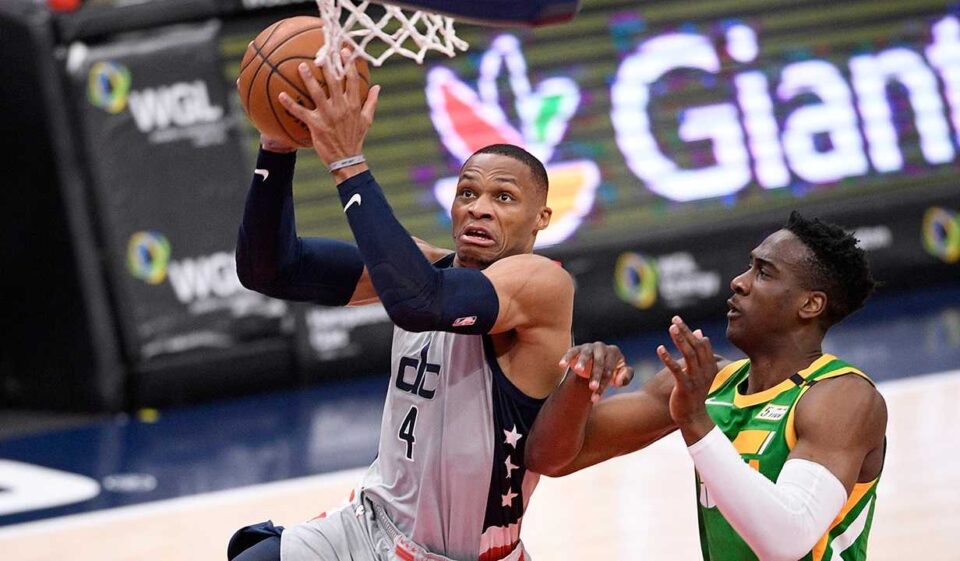 It was a spectacular duel of couples. On the local side, Bradley Beal and Russell Westbrook at full blast; Donovan Mitchell and Joe Ingles broke it on the visitor. The first ones scored 78 points and the second ones made 76! A real madness.

The Washington Wizards defeated the Utah Jazz 131-122 to end a 5-game losing streak (albeit with a tough schedule – a pair of losses to the Bucks and one to the Sixers). He did so by overcoming the fact of running out of Latvian Bertans due to a muscle injury, when he had only been on the track for 4 minutes.

The locals deserved the triumph because they sent on the scoreboard with clear advantages and never had real problems.

Beal finished with 43 points (30 in the second half!) After making 16 of his 24 shots from the field and 4 of his 6 triples and Westbrook already has 13 triple-doubles to his credit after doing really well again and adding 35 points, 15 rebounds, and 13 assists, being above 50% in the field shot and amending his poor shooting from free practice with 9 of 11. The duo of yore was impressive.

Wizards already led 64-46 at halftime with 22 by Westbrook and reached the third quarter’s end, maintaining the same lead with 100-82. Demolishing their offensive.

The closest Utah got was 7 points (112-105 with just over 6 minutes left). Perfect control of the capital, who did damage with the points achieved from rival losses.

March is not being, of course, the best month for Utah Jazz, which seems to have lowered the piston a bit, or at least a more irregular team is sensed, something normal considering the wild rhythm that Quin Snyder’s team had in the season.

The games of Donovan Mitchell and Joe Ingles were useless, who started to cover Mike Conley’s loss, who rested.

Mitchell equaled his best score of the season with 42 points that he accompanied with 6 assists. Ingles broke his best scoring record since he was in the NBA and tied a Jazz player’s record for 3s in a game. The Australian finished with 34 points after offering spectacular hitting percentages: 12 of 17 on the field with 8 of 10 on triples.

Frenchman Rudy Gobert made a double-double, and Royce O’Neale added 12 points and 7 rebounds. But Utah had hindrances, and they were not few.

Gobert himself had a night to forget from the free throw with a run of 2 out of 10. However, it was worse for others. Bojan Bogdanovic was 2 of 12 on the field (0 of 6 from beyond the arc), Jordan Clarkson was 2 of 11 (1 of 8 from the triple), and Georges Niang finished with 1 of 7. Too many players on an erratic night to end up winning the match.

Comfortable Wins For Nets And Lakers Against Fragile Rivals