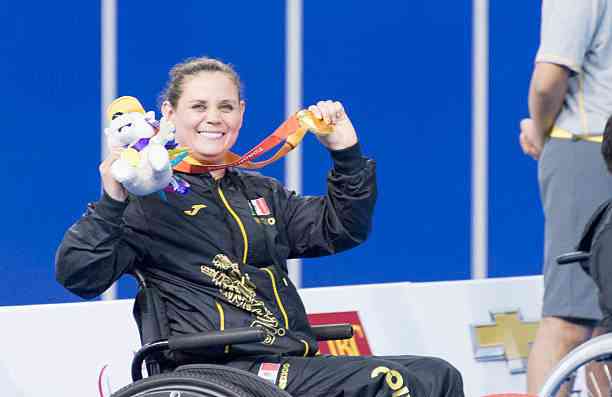 Nely Miranda underwent surgery in February 2018 and overcame a three-year absence to get a place at the Tokyo 2020 Paralympic Games.

Nely Edith Miranda Herrera was born on August 2, 1972, in Veracruz. At the age of 28, she suffered the terrible accident that led her to use a wheelchair: she fell from a ladder at work, an accident for which she lost consciousness for several days and resulted in her current condition.

“My legs got tangled in the railing, my trunk turned the other way and my head hit the wall. I was left tetraplegic with a stroke and suffered amnesia for 11 days; however, when I returned, I decided not to be a victim,” she said in an interview for the EFE agency.

But although her life changed radically and the medical prognoses were not promising, the Veracruz woman struggled to get ahead, for herself and for her son, only four years old. Her therapy led her to discover swimming, and since then, she has not known anything other than success in adapted sport.

The pools became the perfect setting for Nely Miranda to reach the world and Paralympic top just a few years after the accident that changed her life forever.

Nely Miranda began her sporting career in 2005, and it took her a very short time to start collecting medals. She participated in the Parapan American Games in Rio 2007, where she won a silver medal.

A year later, she shone like no one else in her first Paralympic Games: Beijing 2008. The swimmer won two gold medals in the Chinese capital, as she became Paralympic champion of the 100 and 50 meters freestyle (S4 category), setting the world record in the 50m with 46.27 seconds. That same year she won the National Sports Award, recognition that she would obtain again in 2013 and 2015.

And it did not take long for him to continue adding medals and championships to her record. Miranda appeared at the 2011 Parapan American Games in Guadalajara to win three more medals, all bronze. However, her best performance would come four years later.

Nely Mirada took the podium six times at Toronto 2015. She won four gold and two silver medals, becoming the most winning Mexican athlete of that edition. Her return to the Paralympic Games took place in Rio 2016, where she was the standard bearer for the Mexican delegation and returned home with a bronze medal.

But if all of the above were not enough to recognize it as one of the greatest stories of overcoming, it remains to talk about her latest feat. Nely Miranda will arrive in Tokyo in 2020 after overcoming an operation that took her away from the water for three years.

The Veracruz swimmer had to undergo surgery in February 2018 and resumed activity until early 2021. And yes, she did it to find and win a ticket to the Tokyo 2020 Paralympic Games!

“For me it was super exciting to return to the pool, to feel that adrenaline again, to listen to the start to compete in my first competition, which was 50 meters breaststroke; it’s really like I’m a rookie again, after everything that happened,” explained Miranda in a press conference.

The Paralympic champion in Beijing set the minimum marks in the 50m backstrokes (S4) and 150m medley individual (SM4) events at the 2021 Lewisville Para Swimming World Series, held in Texas. That earned her a search for sports reclassification in Germany in June.