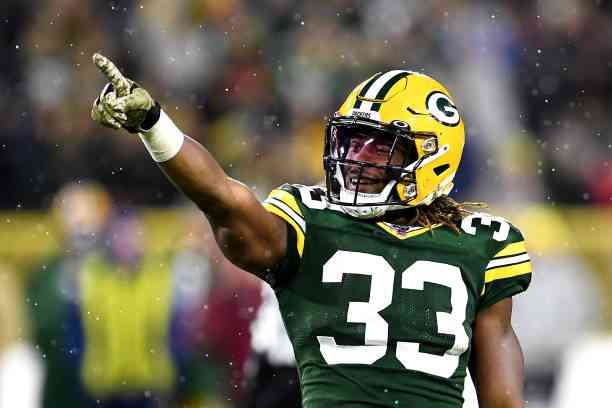 Packers running back Aaron Jones lost a pendant with his father’s ashes, but it had a happy ending because he got it back the next day.

The running back of the Packers, Aaron Jones, lived a night of ups and downs in the past MNF against the Lions, individually he made 4 annotations to give the first victory to Green Bay -congratulations to those who had it in the Fantasy- and lived one of the bigger worries because he lost his father’s ashes.

We are very serious, because Aaron Jones lost his father’s ashes inside Lambeau Field, but we do not mean that he carried them in an urn or something similar, but that he carried some of the ashes in a pendant that he wears during the games in the NFL.

American football players are allowed to wear chains or any type of pendant, there is no restriction for it, the league is not responsible if in any tackles the rivals break it or something like that, it is at their own risk.

Aaron Jones wasn’t (so) concerned about his father’s ashes, strange as that may sound. At a press conference after the game, the running back said: “If there was any place to lose it, that’s where my dad would have wanted me to lose it. I know he’s smiling.”

The pendant was lost in one of the plays, and it was a black locket shaped like a football. His father, Alvin Jones Sr. passed away at 57 years of age in April 2021 due to complications with COVID-19, and although he did not see badly losing him at Lambeau Field, some of the gardeners helped search for the pendant.

Thanks to the outfielder team, Aaron Jones will be able to recover his father’s ashes, and the same player announced it on the Packers’ social media account, in addition to thanking Bryan’ Flea’ Engel, the person who found him at 1:45 am So you deserve a reward for the long hours you worked.

Now let’s hope that Aaron Jones does not wear his pendant on a playing field again, especially when he is away or that he takes ‘Flea’ and they leave him to work in another stadium that is not Lambeau Field or the other option is that he does not wear a pendant with his father’s ashes.