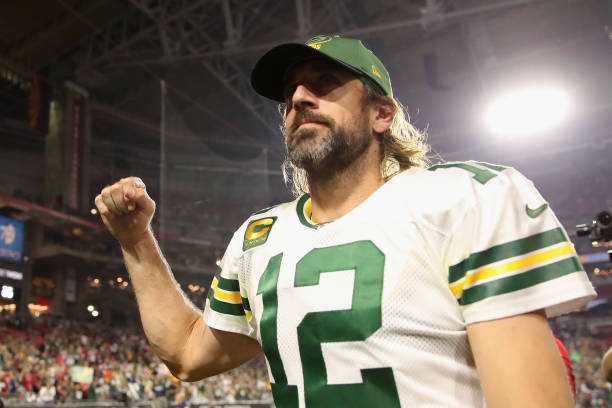 When did Paty Navidad and Aaron Rodgers get together? Packers QB commented against COVID-19 vaccines.

The issue of COVID-19 and vaccines has generated much debate, in sports there are NFL players who have refused to be vaccinated, one of them is Aaron Rodgers, who is in the eye of the hurricane by certain comments in the style of “Sit down now, sir” about vaccination.

Among the detractors of the vaccine for COVID-19, we can find quotes such as “The vaccine will make you zombies“, from the mind of Mrs. Paty Navidad and this November 5, a new phrase arrives like a dart against vaccines.

On the Pat McAfee podcast, Aaron Rodgers sent the point to say that he is concerned about the possibility of vaccines causing sterility. The Packers QB dropped the bomb, leaving locals and strangers surprised.

But how did you come to this conclusion? Perhaps he went to the largest library in California (where he is from and was before the preseason with his partner Shailene Woodley), because the truth is that the answer is no. ” For me, it involved a lot of study in the offseason,” Aaron Rodgers said, confirming that he did his own research.

Aaron Rodgers teaches every time he enters the field, we do not doubt it, in fact, he is one of the best quarterbacks in history, peeeeeeuro, that does not mean that he can teach other topics, much less like the vaccine against COVID-19, however, he continued talking about the issue and released other gems.

What else did Aaron Rodgers get from his research while there was no NFL season?

“I’m someone who is a critical thinker,” was one of the phrases he said to the former Indianapolis Colts kicker. Rodgers spoke further about his research: “In April, the J&J vaccine was withdrawn due to clotting problems. So the J&J vaccine was not an option at the time, “so that vaccine was ruled out.

The bad thing for Aaron Rodgers – and his research – was that the virus caught up with him, unfortunately. He tested positive for COVID-19 and will miss at least one game because he must comply with mandatory isolation and the NFL is already investigating those protocols in the Packers.

How did the Packers QB get infected? In his own words

Yes, he tested positive for COVID-19, but according to Aaron Rodgers, this is the fault of the people who are vaccinated, as they read it, surprising as it may seem. “The only time I don’t wear my mask is when I’m around all the vaccinated people.”

All this seems to be taken from the mind of some famous comedian, but it really is not like that, it is Aaron Rodgers’ thoughts on vaccination: “I am an unvaccinated person, so the right will defend me and the left will cancel me. but all the time, I don’t give a shit about any of them. The only wish I have is to empower people to take autonomy over their body.“