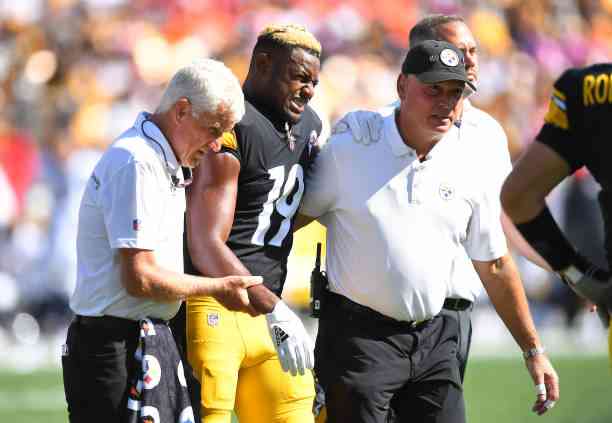 The Steelers have a sensitive loss for the remainder of the season, and JuJu Smith-Schuster leaves the field due to injury.

The Steelers experienced critical moments in the 2021 season, fortunately for them, it is always better to face the bad news with a victory, and they got it against the Broncos. At what price did the triumph cost them? Losing JuJu Smith-Schuster for the remainder of the season.

The receiver leaves a difficult gap to fill in the Steelers offense, in one that has not found its best moment in these five NFL weeks and that Ben Roethlisberger will have to do work without his best weapon in the air.

Although the Steelers are at the bottom of their division, the truth is that that team cannot be written off, but it will have a tough few weeks without JuJu Smith-Schuster. A shoulder injury will be the one that takes the receiver away from the Steelers and the fields.

This season, JuJu Smith-Schuster was not having the best numbers, since he only received 15 passes for 129 yards in the four games before the Broncos, the bad moment of the team on offense did not help the receiver to have a positive performance.

The former USC university player will not be able to return to his fifth season in the NFL, and his future is quite uncertain, as he surprised in his rookie year, but in the following three seasons, he failed to achieve the numbers of his first season.

What can we expect from the Steelers offense without JuJu Smith-Schuster?

‘Big Ben’ is in serious trouble with their offense, which has not worked as they wanted, and they will have to improve, although it will be completely difficult because the offensive squad is reduced to the maximum due to injuries, which has been a regular issue in the Steelers.

We go with the receiving corps, because in the official Steelers roster, there are six receivers available for the 2021 season, unfortunately, we have to discount JuJu Smith-Schuster due to injury, and the options continue to be reduced.

James Washington, another of the receivers, is out of the following games and only has four left, so Ben Roethlisberger will have to pull out some tricks to enforce his offense or go to free agency, what options are there.