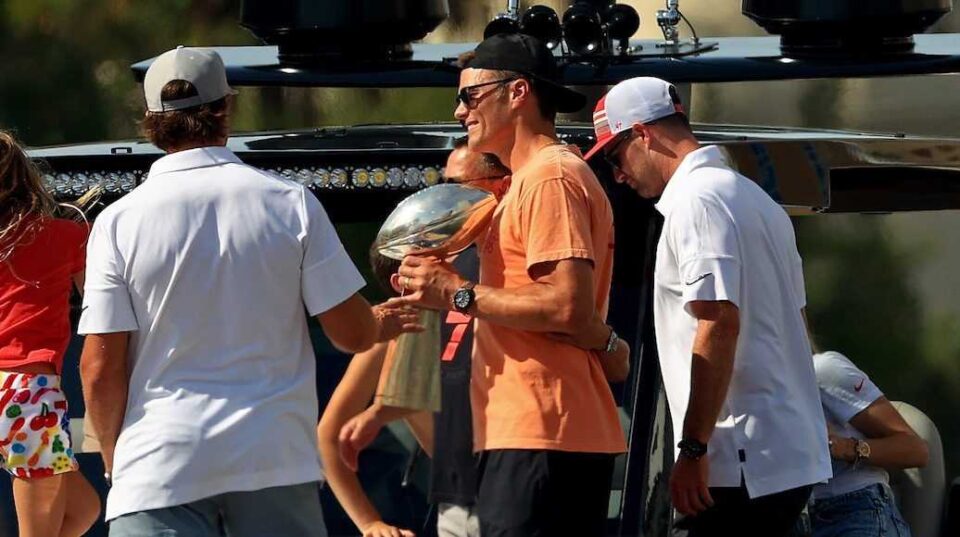 Remember Tom Brady tossed the Vince Lombardi Trophy from boat to boat during the Tampa Bay Buccaneers festivities? Well, not him, hahaha. The quarterback confessed that that day he spent drinks during the celebration and therefore does not remember many things from that day, including the reckless launch of the trophy.

Tom Brady’s video circulated on social media on February 10, when the players celebrated the title at the Tampa Riverwalk, where the players were divided into pots, and Brady had the idea to pitch the Vince Lombardi to Rob Gronkowski and Cameron Gray and this one.

But by this time, Brady claims that he had already had a good dose of tequila, so he was no longer aware of what he was doing.

“I don’t remember anything. First of all, I wasn’t thinking at the time . It was thinking ‘this seems like a lot of fun to do,'” said the quarterback, who later came under fire from the family in charge of designing the trophy.

Cameron Gray saved him from a big problem

Brady said he was grateful to his teammates for having captured the trophy, because if it had fallen into the water, then he would have been in trouble.

He acknowledged that Cameron Gray’s catch was not easy, as the trophy has sharp edges. “I found out later, if that had been an incomplete pass, I would have dropped like 24 meters. I’m so happy Cam caught him,” Brady said.

After the trophy launch video, images circulated of Brady leaving the place quite cheerful, with his eight-year-old daughter following behind.

“And who could imagine that an 8-year-old girl would have more common sense than anyone in that whole area at that time?” joked the top winner in Super Bowl history. His daughter was yelling at him not to launch, which confirms that he was the reasoning person at the time.