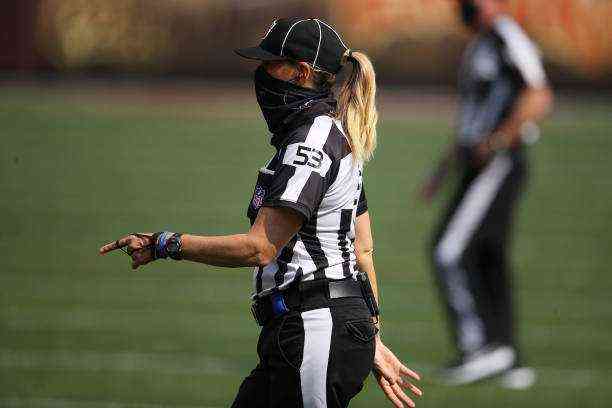 On Tuesday, the American Football League (NFL) announced that Sarah Thomas would be part of the refereeing team for the 55th edition of the Super Bowl, which will be played on February 7.

Sarah Thomas, 47, will be one of seven referees for the Super Bowl, which will be played in less than a month in the city of Tampa, Florida. Thomas will be part of the refereeing team led by Carl Cheffers, who, after 21 seasons of experience in the NFL, will direct her second football final after the one she referred in 2017.

In 2015 Thomas had already become the first permanent judge in the history of the NFL and in 2019 the first to referee a playoff game, which is why, with this new designation, the American is on track to be a legend of the sport. North American.

“Sarah Thomas has made history again as the first official woman of the Super Bowl,” said NFL Vice President of Football Operations Troy Vincent. “Her elite performance and her commitment to excellence have given her the right to referee the Super Bowl,” he added.

Regarding the group that Carl Cheffers will lead and of which Sarah Thomas is a part, Vicente noted: “They are the best of the best (…) Their work throughout a season of 17 games has earned them the honor of refereeing the most important match on the biggest stage in the world”.

The rest of the umpire team is made up of five other members, who will be Fred Bryan, Rusty Baynes, Eugene Hall, and Dino Paganelli, who have already worked in at least one Super Bowl. The Field Judge will be James Coleman, who will complete the squad, which will be the two debutants of the event together with Thomas.

The participating Super Bowl teams will emerge from the conference finals to be played on Sunday between the defending champions Kansas City Chiefs and the Buffalo Bills and between the Tampa Bay Buccaneers and the Green Bay Packers.

HOW, WHEN, AND WHERE TO WATCH THE NFL CONFERENCE FINALS LIVE?