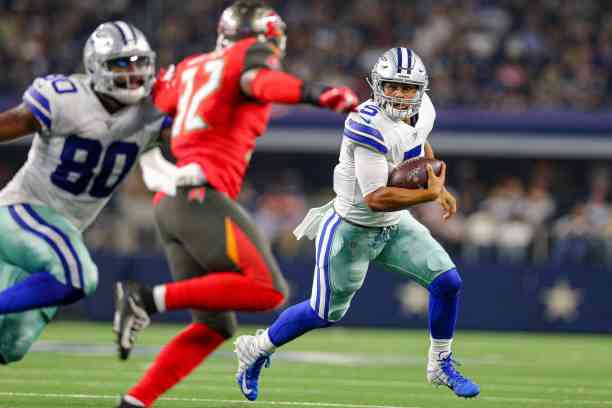 The 2021 NFL season begins this September 9, with the champion Buccaneers hosting the Cowboys at Raymond James.

The wait is over, and after more than seven months without American football, the NFL returns and with a season full of expectation, curiosity, and many annotations. However, this season has a peculiarity, and that is that it will be the most extended season in history, which begins with a duel between the Buccaneers against the Cowboys.

As is customary in the NFL, the champion opens the season, and there is no one better to give the welcome flag than Tom Brady facing one of the most popular teams in the world, the famous and so-called “team of America,” the Dallas Cowboys.

Dak Prescott makes his return to the NFL, although he was in some games last season, he had to leave the field with a broken leg, but after a long recovery, he wants to regain his place and lead the Cowboys to the postseason.

It will not be easy, although the Cowboys have an offensive hat-trick to scare anyone (Prescott, Elliott, and Amari), the truth is that they have not displayed all the talent they have and have fallen short in when to reach the postseason, with everything and that they are in the weakest division of the National Conference.

If we talk about the National, it is impossible not to mention one of the favorites, the Buccaneers. They bet on keeping most of the players that led to their Super Bowl success, with a few additions, but the bottom line is that Tom Brady will be back with the team.

With Brady commanding the offense and his attacking weapons almost intact, the Bucs will seek to win the Super Bowl consecutively, although they will not have an easy path, which will start in Tampa, Florida.

Where to watch the first game of the NFL season between Buccaneers vs Cowboys?

Everything will begin this September 9, on Thursday the first kick will be experienced to start the 2021 season at 7:20 pm. Raymond James Stadium will be the setting for an aerial duel between the Buccaneers and Cowboys.

In order to follow the game, you can tune in to channel 9 of open television to be able to follow the transmission on Televisa. If you prefer the option of pay television, ESPN will be the only channel on which the game is followed, check your programming to find out that the channel appears on the TV system.

Rest of week 1 of the NFL

After the Buccaneers vs Cowboys on Thursday night, we will have to wait a couple more days to continue the remainder of week 1. The NFL prepared a day full of emotion – which will continue throughout the season, and we leave you the games that you should not miss- and that will keep us on the edge of our seat with everything and snacks.

Some of the duels that stand out are: Buffalo Bills vs Pittsburgh Steelers, Tennessee Titans vs Arizona Cardinals, Kansas City Chiefs vs Cleveland Browns, and the New Orleans Saints vs Green Bay Packers. But if they thought that all the emotion had ended there, they are very wrong.

The classic Monday night game closes week 1 of the NFL, and although on paper it does not seem to be such an attractive meeting, the duel between Las Vegas Raiders vs Baltimore Ravens promises to spark sparks not to be missed.