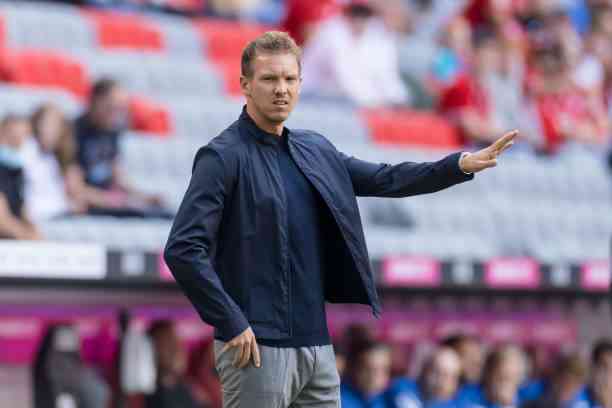 Good idea or disaster? Julian Nagelsmann proposes technology in football, similar to that of the NFL, to communicate managers with players.

Thanks to technology, the world of sports evolves and advances year after year, with options such as VAR. Some still don’t fully accept it, and others find it a great tool. Others are considered crazy, like Julian Nagelsmann, coach of Bayern Munich, who is looking for new options to innovate football.

The work of a strategist goes beyond tactical talk or training. However, the German took an even bigger step that left millions of fans speechless, and criticism was unleashed on all sides.

Bayern dominated the Bundesliga comfortably, but it seems not to be enough. At the start of a new era with Julian Nagelsmann, the Bavarian team leads the season with 4 wins and a draw, 20 goals, and only 4 against.

At the end of the 7-0 win against Bochum, the strategist came up with a new idea. In addition to ensuring that soccer needs to revolutionize faster, Nagelsmann explained that an ideal change would be to have the ability to communicate with their players through a microphone, just as it happens in the NFL.

“Football must stop hiding behind tradition and revolutionize. American football is much more technologically advanced than soccer. The quarterback has a headset to listen to his coach, we absolutely need it. As a soccer coach, you can get an incredible amount of that, “he said at a press conference.

The intention is to improve communication between coaches and players on the field. Julian Nagelsmann considers that 15 minutes of rest is too little to transfer all his corrections and tactical notes in the dressing room, so the hearing aid would facilitate the work during the 90 minutes.

Julian Nagelsmann’s approaches to the NFL

Although this might seem like an idea from one moment to the next, Julian Nagelsmann knows the NFL environment and has contact with coaches like Andy Reid. Bayern Munich and the Kansas City Chiefs organized a meeting between the captains of their boats and shared a long talk.

Exchange of teams, their first jobs, and even opinions about which area is most important to win a championship. Experience and youth in one place.