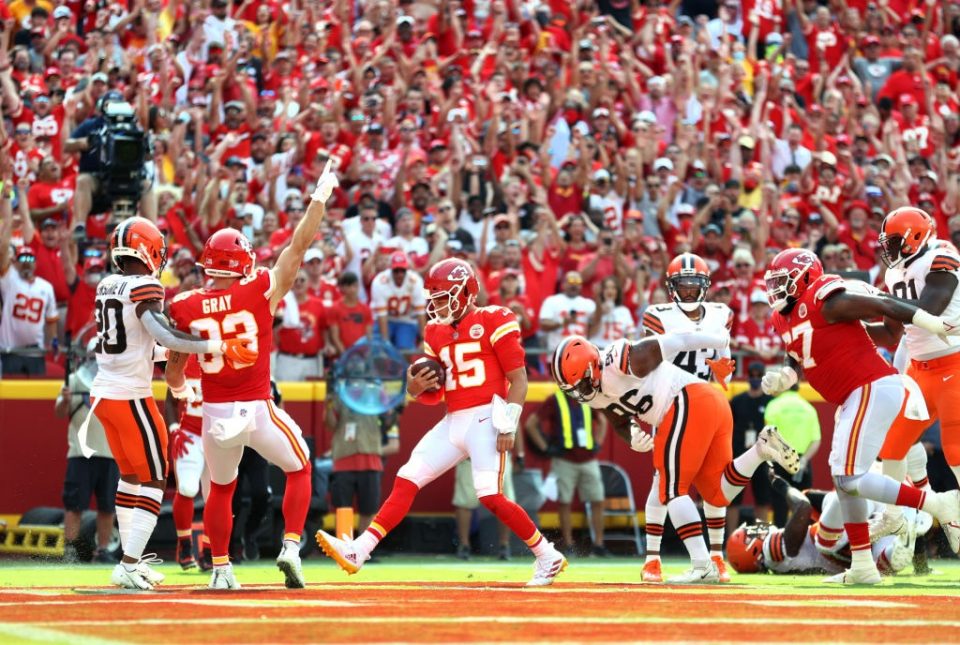 Great emotions left the return of the NFL, Chiefs, and Steelers with cartwheels, Packers, and Rodgers were absent in week 1 of the NFL.

Last Thursday officially returned to the NFL with the last-minute Buccaneers victory against the Cowboys after this great game.

It was a week full of great surprises with some teams and others to confirm that they were not living their best moment. College debuts in the NFL and great taste in the mouth that they left on the grid. While some consecrated people who were conspicuous by their absence – right, Rodgers.

But not all the show was on the court, as the fans in their official return to a new NFL regular season, and the truth is that they gave life to a football game again. Carolina blew the wall with her animation for TV, as she presented a digital Panther inside the stadium that looked impressive.

Comeback Sunday in the NFL

The Steelers came with more doubts than certainties to week 1 of the NFL and faced some Bills with the tag of favorites, not only in the game but throughout the season. And the game began with the story perfectly adapting to the script that was established; Buffalo was eating the Steelers.

The Bills led the score until the third quarter, although the Steelers did not go without points, they made 3 in the first quarter and 3 in the third quarter. Wow, in the last quarter, the historic comeback in the NFL began to take shape, thanks to Big Ben and the special teams.

The Bills and Josh Allen let go of the first win of the season, and although they looked impressive at first, it was shown that they have shortcomings that other teams can take advantage of.

Mahomes had a difficult start, before some Browns were hungry for victory and feat, things did not start well for the QB. Few opportunities to open the scoring in the first half of the game cost them to go down on the scoreboard for most of the game.

Although they did score a few, the Browns always led the way. It was until the last quarter that the desire not to lose appeared, and the comeback began to work, which came thanks to two touchdown passes from Patrick Mahomes, which ended with 1 TD per run and 3 aerial touchdowns in this 2021 season of NFL.

The Packers and Rodgers lived a soap opera before the NFL’s regular season, the Qb, and his franchise did not know if they would continue together. The quarterback mentioned on a few occasions that he did not want to return with the team, although obviously that did not happen, and they reached an agreement for 2021 one day.

Against the Saints, who left some doubting because Drew Brees was no longer with the team. Everything indicated that the Packers would crush New Orleans, simply because they have the best offensive trio in the entire NFL.

Wow, things went in a totally different direction and were not good for Rodgers. A crushing 38-3 they had to suffer during and not a point on offense they could make. We know it’s the first game of the season, but do we see the ultimate Packers debacle with Rodgers?

One of the spotlights was on the Jaguars game – believe it or not – and all thanks to the new to new NFL sensation Trevor Lawrence. He would have his debut in an unbeatable game against a very depleted Texans.

He made his first touchdown pass, but made rookie mistakes that cost him turnovers. He finished the game with 3 TDs by air, but he could not give a victory to his people, who in fact, must be excited about what Trevor Lawrence showed.

The Texans were the surprise of Day 1, without Deshaun Watson and totally unarmed, everything indicated that it would be a difficult season for Houston. They brought out their mettle and showed that they are a solid team, at least against the Jaguars. We will see how it goes throughout the campaign.

Raiders and a Victory Drama

Although they started the game as victims against Baltimore and Lamar Jackson. They managed to send the game into overtime and missed a great opportunity to score at the 1-yard line. In fact, they intercepted Derek Carr in the red zone, but the Ravens did not take advantage.

They fumbled – Lamar Jackson actually lost it – and on the play that followed, Carr hit a pass to go into the end zone and score the first Raider win of the year.

JJ Watt Signs With The Arizona Cardinals For $ 31 Million!