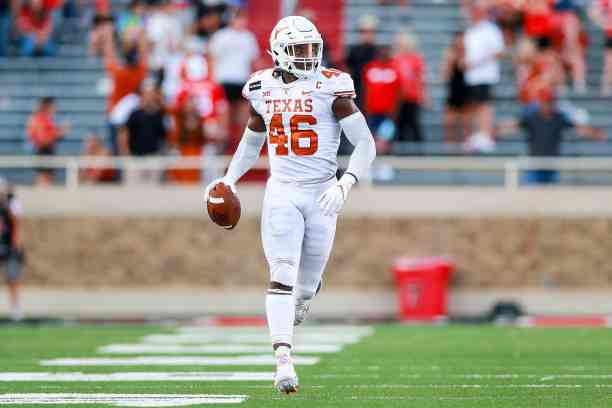 Once the main prospects of the First and Ten Big Board have been thoroughly reviewed (at least, those that, in our opinion, have ample first-round possibilities), we bring you the brief and general analysis of the rest of the prospects on our board, from So let’s complete an X-ray as wide as possible of the players that we will see parade throughout the three days of the 2021 NFL Draft.

On this occasion, we have to talk about the 46 to 50 leaflets, which include names that we have developed more thoroughly in other pieces, but that over the process have lowered their stock to find themselves at this point.

A prospect whose speed stands out mainly (4.39 at 40 yards) thanks to his track record running. Able to find the ball and be disruptive on the play (4 interceptions in 2020, 2 for a touchdown). It has good versatility to line up on the inside and outside of the numbers. You will need to correct your reading to recognize plays quickly and improve your tackling technique so that your lean physique is not a problem in the NFL (soaked and freshly eaten, with spider jobs at 88kg).

His skills will make him find playing time from his first season as a professional, ideally being a corner two or even three in order. Teams like the Cardinals, 49ers, Rams, Cowboys or Bills could use their second-round pick at Stokes.

The kind of player that is sought for outside linebackers in fronts 4-3, since he has physical characteristics that allow him to stand out in pass coverage – personal or zone – in addition to moving very fluently to find the ball. It is striking that he could have declared last year to the Draft having graduated from North Dakota St., but with a year of eligibility, he decided to transfer to LSU, where he went from facing a Division II level of competition to one of the most competed as is SEC.

You will need to improve your reading, aggressiveness and tackling technique to stand out in the NFL. The end of the second round will be the earliest we’ll hear his name, teams like the Packers, Browns, or Saints could find him at that point, or the Lions or Broncos at the beginning of the third.

He has the characteristics that many offensive line coaches love: strength, toughness, and unremitting effort. The highlight is his ability to move defensive linemen backwards. In pass protection, he anchors well to the ground and has a good balance to keep the pass rusher from passing and contain the bull rush, in addition to his good hands to find the defender’s chest, maintaining his block long enough and stifling the second effort of the defensive.

Going out to block to the second level or into open space trap blocks, he’s not at his best. Although he takes good angles, he has a hard time adjusting his body on the run to find the right defender. This is a player whose stock has fallen a lot, and now it seems that the third round will be the place where he will be selected, in the area of Vikings, Rams or even Packers.

The first thing that strikes you with Joseph Ossai is a non-stop engine, which puts you in a position to make plays or influence even if they are not going your way. His consistency makes him get tackles or sacks late on the down, even though it looks like the running back or QB has already escaped. He has a great ability to generate ball deliveries. He can line up two or four points at the end of the line, appealing to 3-4 or 4-3 front lines, although he showed his best as an outside linebacker.

His biggest problem comes from lack of experience; spending time trying to find his place in the lineup makes his game less polished, and he has only one season as a starter at the position, so his readings are not the best. He’s a solid second-round prospect for early teams like the Jets and Falcons or as late as the Titans or Ravens.

An impact defender from the center of the line. He has great movements to evade the block, and even when the rival lineman manages to take it, he goes so far as to challenge him to beat him to the quarterback hunt eventually. He has good pass rush techniques to make the passer uncomfortable or even end the catch. When he uses his hands to evade the block or tackle the QB, his margin of error is minimal. His game is based on what he can do, pressing the QB and improving defending the race.

This is another case of a player who has fallen, first he was among the first 20 teams and today it is doubted that he can enter the first round; however, the Titans at the end of the first day or the Jaguars, Cowboys and Giants at the beginning of the second would be good destinations.

Stays! Dak Prescott’s Career To Continue With The Dallas Cowboys