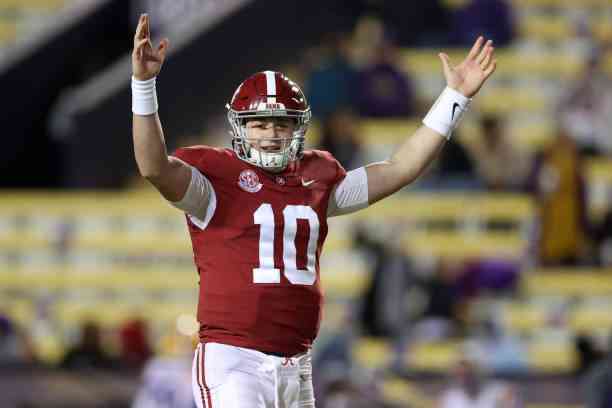 Once the main prospects of the First and Ten Big Board have been thoroughly reviewed (at least, those that in our opinion have ample first-round possibilities), we bring you the brief and general analysis of the rest of the prospects on our board, So that we complete an x-ray as wide as possible of the players that we will see parading throughout the three days of the 2021 NFL Draft.

This time we have to talk about prospects 61 to 65, where we find three defensive line prospects that can contribute to their teams practically immediately, being taken on the second day, and that closes with a quarterback who, despite the fact that, for talent, he is in this zone, it is highly likely that he will be selected very early in the first round.

A real bully on the line. He displays a lot of strength and, above all, attitude. He stands out defending the race, it is without a doubt the best part of his game, since when it comes to pressuring the QB, he still has a lot to improve with little fluidity in his movements to find the right path and a lack of pass rush plan.

In a class that is not very talented in position, it has been positioned as a good option for the second day, perhaps in the third round in teams that need an element of technique 1.

A prospect who has a great ratio of size, weight and speed (1.92 m, 97.5 kg and 4.45 seconds at 40 yards). He is very good in the center of the field looking for the ball and interposes his body to make the catches without allowing the defense to pass, in addition to looking for the ball up, adjusting his body in the air to make the catch, although with inconsistent results. Show flashes of being a playmaker.

He must work to improve as a blocker and to ensure the catch, as he has some drops due to lack of concentration. His production was never the best at the collegiate level, registering only one game of more than 100 yards in his career, and he never had a season of more than 40 receptions. Teams looking to supplement an established receiving corps in the third round would find a good fit in Collins.

A player noted for his versatility to align himself at the center of the line as well as at the end. He had a very good production in the race, registering 19 tackles for a loss of yardage, yet it shows that his best level is yet to come. He is explosive and shows a great level of constant effort. Though not very powerful, he has active hands and combines them with his lateral agility to find his way to put pressure on the QB. Sometimes it exposes your chest too much, and that makes it susceptible to being blocked more easily.

The combination of production and potential make it attractive for the second round for anyone who wants to spend some time developing it.

He looks like the perfect definition of a sleeper, since the characteristics of his game are very transferable to the NFL: great production in tackles for loss (19) and sacks (8.5) in two years, in addition to an intelligence and awareness of what happens around him very prominent that help him to always find the ball when he is close. It can take responsibility for one or two holes and holds its ground well against double blocks.

Occasionally he struggles to get rid of the blocker to make the tackle in the running game, but it is something completely improbable, since he has less than ten games as a starter; Judging from the improvement it has shown, it suggests that the potential is very high; so the third round seems like a good time to come up with a team that hones its skills and eventually fights for a starting spot.

A player who grew as his career progressed in Alabama and took advantage of his starting position in 2020 to jump to first-round QB in 2021. He knows how to throw with pressure from the defensive on top and with precision, coupled with the fact that he knows how to develop good chemistry with his receivers to get complete passes. He effectively positions the ball in close quarters and is patient to throw the pass. Your anticipation is very good, as it helps the receiver to get reception. He is very good at his fast passes and his starting shots.

He must improve his timing to shoot and in the placement of the ball, as he frequently gets his receivers in trouble to catch the ball even though they have already created separation with coverage.