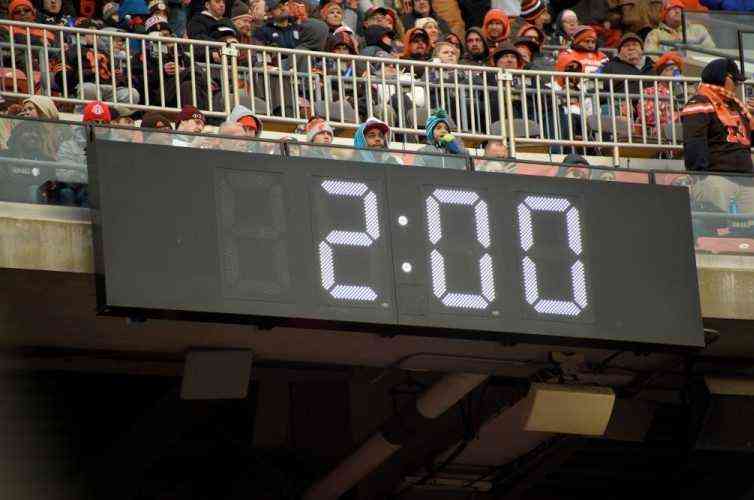 The two-minute break in football is part of the rules and tradition of the NFL and other football leagues, but have you ever wondered why this break is taken? What is it for? Why is it only done in the second and last quarter?

If you have asked yourself any of these questions or this question has never arisen, but it has already caused you curiosity, you are in the right place to go out into the world and explain the story to other mortals.

Why the two minute break?

To understand the origin and purpose of this practice, we have to go back to the beginning of the NFL, in the 1920s. In those days, the only person who kept track of time was one of the officials; there were no clocks in the stadiums, or at least not all buildings had one.

For this reason, the NFL considered that the only record of the official time of a game was that of the referee, so it was his function to inform teams when there was little time left to go to rest or to finish the game.

Why is it only applied in the second and fourth periods?

The two-minute break served so that the teams had a space to assess their strategies, so that the team that had the advantage could plan their last plays to keep the score in their favor, and in the case of the losing team, it was the perfect opportunity to rethink the next plays to try to tie or come back.

This pause only applied in the final part of the second quarter and of the last because they were the most decisive quarters of the game, especially in the last period, so that if the score is closed, it throws moments and plays that put the nerves on edge and this benefits the show; applying the pause in all periods would cut too much the pace of the game.

Evolution to a business practice

As the years passed, stadiums began to install clocks that recorded playing time, so that players, coaches, and fans were aware of how much time was left to finish each game, even so the NFL kept the time of officials like the sole officer.

It was until the merger of the NFL with the AFL that the stadium clock time was validated, but the practice of the two-minute pause remained, since the television stations had since taken advantage of that recess for commercial announcements, and it is the main reason why the pause continues to this day.

The NFL Confirms The First Players Attending The 2021 Draft