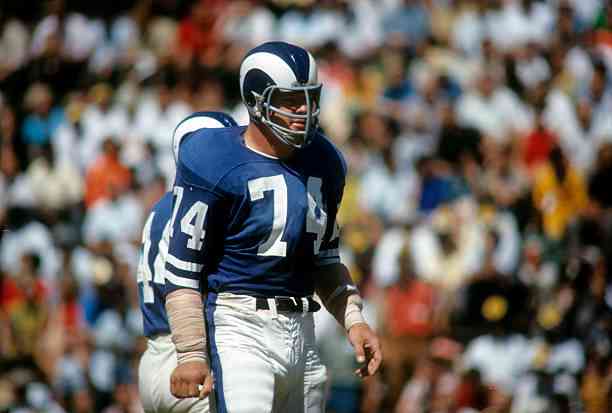 The Los Angeles Rams are an old and time-honored franchise. In their history, they have had multiple venues, in each one, they had important players who have left their names for posterity. Here are the top 5 players in the history of the Rams. We await your comments and your own Top list.

The Oregon graduate made it into the league in the 1949 Draft and played his first nine seasons for the Rams, and to be honest, he was extraordinary. He was named to six Pro Bowls during his tenure, and his greatest achievement was leading the team to an NFL Championship Game victory in 1951, which was the second championship in franchise history. However, his last three seasons in the league were with the Eagles, and he retired as MVP in 1960. Also, well deserved, he has been a member of the HOF since 1971.

Herbert Jackson Youngblood was another of the dreaded Rams linemen of the ’70s. Along with Deacon Jones and Merlin Olsen, Youngblood terrorized the league and stole the spotlight from the defensive end. During his 14-year career, he participated in 202 games, went to seven Pro Bowls, eight times All-Pro in addition to winning twice the recognition as Defensive Player of the Year in 1975 and 1976. It is unofficially estimated that Youngblood had more than 150 sacks. He is a member of the team of the 70s, and his number 85 is retired.

An unstoppable player, even as a rookie. In the NFL, he is considered one of the best running backs in history. He began his career in 1983 and finished the season with 1,808 yards and 20 touchdowns, records that remain unbroken to this day. He played with the Rams for five years and managed to exceed a thousand yards each season, reaching 7,245 and 56 total touchdowns, thus averaging 1,449 yards per season (despite the last one starting only two games), 111.5 yards per season.

Dickerson held the record for the most yards in a season on the road (2,105) and did so in just his second year in the league, adding 3,913 total yards in his first two years. He attended four Pro Bowls in five years and was a four-time first-team All-Pro. A member of the 1980s Team of the Decade and 1983 rookie of the year, he led the league in rushing yards four times.

The receiver with the most yards in the history of the Rams, and he was with the team for 14 years, thus managing to pass 14,109 yards per reception, surpassing the 1,000-yard barrier eight times and getting 84 touchdowns. Bruce was on the team that managed to lift the Lombardi Trophy in 1999. In 1995 he caught passes for 1,781 yards and didn’t lead the league just because Jerry Rice had 1,848, but to this day, he owns the fifth-best record. In his career, he caught 15,208 yards, number 5 of all time. The 80 on his back has been retired since 2010.

When we talk about defensive ends, the name of David Jones, better known as “Deacon,” should always come up. He had an outstanding 11-year career with the Rams: Drafted in 1961, he was part of one of the best – if not the best – offensive lines in NFL history.

While a member of the Rams, Deacon only missed four games in his final season, accumulating 151 appearances and going to seven Pro Bowls, was a seven-time All-Pro and Defensive Player of the Year in 1967-1968. The sack became relevant in the NFL with the arrival of Deacon Jones, a member of the 1960s team and 75th Anniversary Team. His number 75 is retired.

Hands down the best defensive tackle he’s ever played for the Rams. He spent his entire career on the team and only missed the Pro Bowl once in his senior year. He accumulated nine All-Pro mentions and was the leader of the famous “Fearsome Foursome” nickname that earned him and three other linemen worthy of being feared.