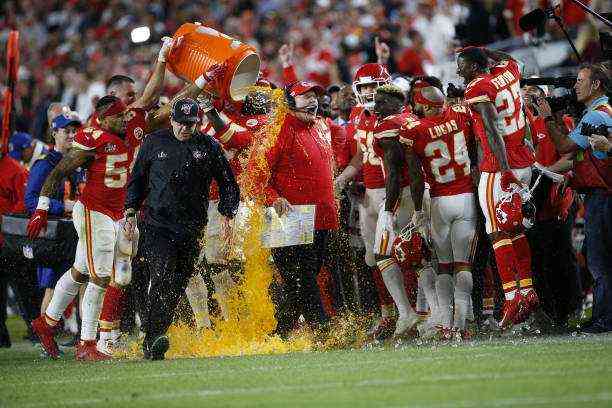 Once the last quarter of the Super Bowl is over, or when the game is completely defined, the winning team coach will not be able to escape the traditional Gatorade bath, which marks the beginning of the celebration. The “victims” of the LV edition are Andy Reid of the Kansas City Chiefs and Bruce Arians of the Tampa Bay Buccaneers.

For Reid, it would be the second consecutive time to receive the Gatorade shower, after winning the 2020 edition. Although Bruce Arians already has two Super Bowls, he does not honor being bathed, as the titles were obtained as an assistant coach. But how did the Gatorade tradition begin?

It all started with the New York Giants

Gatorade began to appear formally in American football with the Kansas City Chiefs, when the Super Bowl was not yet called that, and it became the official drink of the NFL from 1983, so that since year each team has a huge container with the isotonic drink.

The tradition of bathing the coach began in 1984, with the New York Giants, led by Bill Parcells, who had all the pressure on after he made a season for oblivion in 1983.

The start of the season in 1984 wasn’t good either, so before heading into Game 7, his teams were 3-3. According to rumors, a defeat would have caused his dismissal, and Howard Schnellenberger was ready to take his place.

The Giants won the seventh game, but lost the eighth, so the pressure returned just before facing Washington, which featured Rick Donnalley, considered the strongest player in the NFL and who would face Jim Burt on the field.

Parcells worked especially with Burt. The objective was for his defense to carry more weight than he averaged so that he could arrive with greater strength and power and give a message of motivation to the rest of the team.

Burt performed a 20-pound (9-kilogram) dumbbell routine in each hand and hit the mattress for 45 minutes. The rest of the team watched Burt’s effort, and it had a positive effect heading into the game against Washington.

The coach took action in a positive way, so this became a kind of celebration for the Giants, who not only won that game, but found the necessary results to get into the playoffs, in which they were eliminated in the divisional round for the 49ers.

The first bath in a Super Bowl

In the 1985 season, the Giants were eliminated again in the divisional round, but in the 1986-87 season, the New York franchise reached the Super Bowl, against the Denver Broncos, who they beat 39-20.

In the last moments of the game, when the victory for the Giants was already assured, Harry Carson, took Parcells by surprise by standing behind him, wearing a yellow jacket to pretend to be a security element of the stadium, and bathed the coach.

Since then, bathing the coach has become a tradition at the Super Bowl, to the extent that there are stakes regarding the color or flavor of the drink that the Super Bowl-winning coach will be bathed in.

Harry Carson was in charge of showering Parcells in each of the Giants’ wins in the regular season. He spent his entire career with the Giants and had a very good relationship with the coach.

After winning the Super Bowl, the Giants were invited to the White House, and Carson decided to carry the tradition of bathing with the president, Ronald Reagan, although aware that bathing the president of the United States with Gatorade was not a good idea, he substituted the drink inside the bucket for popcorn, that way he wouldn’t spoil the president’s hairstyle.