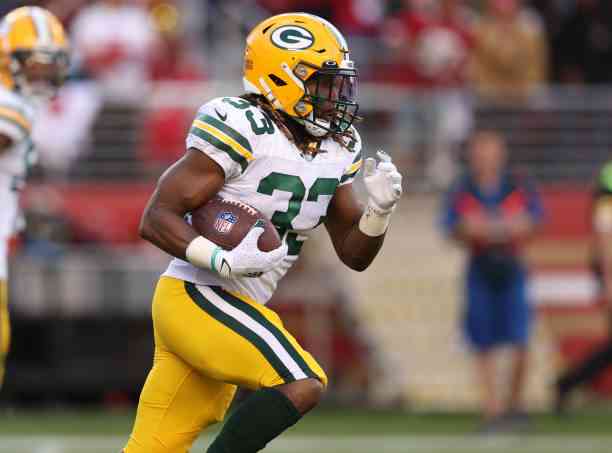 Almost half a year after his father’s death, Green Bay’s Aaron Jones decided to find a way to play in the NFL with his ashes and all.

What is this water that comes out of my eyes? The coronavirus pandemic has left us irreparable losses and Aaron Jones is a witness to it. The NFL running back misses turning to the stands to see his father and friend, so he has new ways to honor him.

The father of the Green Bay Packers element passed away in April this year as a result of COVID-19. For 26 years, they were very close, as best friends, and now Jones is looking for a way to always have Alvin Jones Jr. by his side.

At first he did it with a necklace. This is shaped like a football and contains the ashes of Aaron Jones’ father. Unfortunately, the player lost it during one of the NFL Week 2 vs. Lions game festivities.

The good news is that a fitness trainer found the pendant at Lambeau Field and returned it to Jones. But Aaron Jones himself revealed that to avoid a new incident like this, he would find another solution that would allow him to have his father as close as he wanted.

To avoid another fall and possible loss, Aaron Jones’ teammates decided to help him fulfill his wishes. From now on, and thanks to the people who often seem invisible in the teams, the running back will be able to be with his father in every game.

“Our staff put a little bag on the left side so I can store it there and don’t worry about it falling off. It is inside my jersey, and I can play with it, “he added in the same conference.

So this story had a very happy ending. In fact, Aaron Jones already carried his little charm in his new jersey pocket, in the game against San Francisco.

Who Will Protect Patrick Mahomes? Linemen Eric Fisher And Mitchell Schwartz Are Cut By The Chiefs