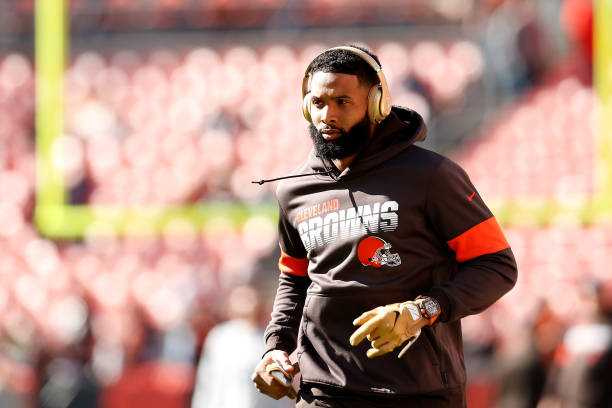 The Browns are erasing Odell Beckham Jr. from training and did not let him leave the franchise on the trade deadline.

No one can deny that Odell Beckham Jr. is one of the best receivers in the league. Neither fans nor coaches or players nor owners, as long as he’s healthy, of course. Unfortunately for the receiver, he is totally erased from the Browns.

Possibly he is not at 100%, in fact, since his time with the Giants, he is not at his best level, but at least he is healthy and without injuries to be part of the Cleveland offense and not just one more, but the star receiver.

Two days this week, Odel Beckham Jr. was excluded from practices with the Browns, but if there is no injury and he is not on the positive list for COVID-19, what would be the reason why they do not need the receiver inside the team.

The truth is that the Browns’ situation is not like throwing the bells to the flight. They are at the bottom of their division, and it does not seem that they are going to leave anytime soon, especially if they hide their weapons themselves as OBJs. We do not know if by week 9 he will be active after two days being excluded from training.

If we analyze a little, the reason for the non-training of Odell Beckham Jr. is strange, because the receiving corps is not only not the best, but it has many casualties and has to use the bench or even third options.

Of the three possible starting receivers, one is OBJ, and the other two are in doubt for Week 9. Jarvis Landry and Donovan Peoples-Jones are as questionable, and only two receivers remain on the team, both backups: Rashard Higgins and Anthony Schwartz, for what causes more strangeness than the subject of Beckham Jr.

Odell Beckham Jr. will no longer be able to leave the Browns

November 2 was the key date for Odell Beckham Jr., it was when you could make changes between NFL teams, but since the date is gone and the Browns kept the receiver, he will have to stay with the team, even if they continue. without using them.

Since before Odell Beckham Jr. was excluded from practice, the receiver’s father had already raised his voice by sharing a video where Baker Mayfield, QB of the Browns, has his son open to receive the passes, worse it does not send them in the direction of OBJ.

Even NBA star LeBron James spoke about it, posting a message in favor of Odell Beckham Jr. on social media, mentioning: “OBJ will show again why #FreeOBJ is special.” So will we see Odell Beckham Jr. again with the Browns? Surely yes, because there is no more, but let’s see what happens with this relationship more broken than godín’s portfolio two days before the fortnight.

Eagles And Dolphins Exchange Pick No. 6 of The 2021 NFL Draft