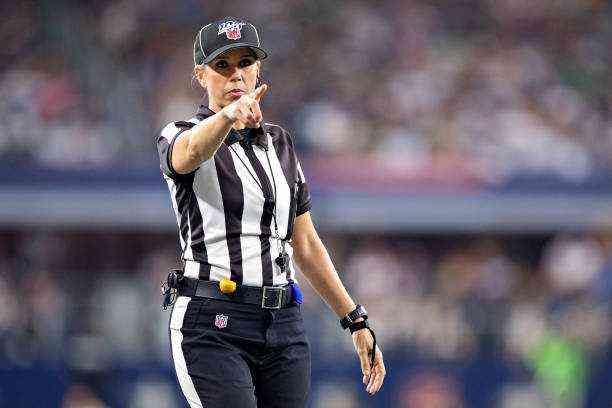 Applause! Super Bowl LV will feature luxury stars: women who hold very important positions on the teams or in the NFL itself.

Who Said Football Is A Men’s Only Sport? The Super Bowl LV is the first to be played in the middle of the pandemic COVID-19, but will also be historic by several women’s participation.

Sarah Thomas was included on the referees team as a down judge a few weeks ago, but she won’t be alone. From coaches, assistants, or analysts, they all fulfill fundamental roles before, during, and after the game.

Both Buccaneers and Chiefs have very important elements, which in addition to perfectly fulfilling their responsibilities, leave behind stereotypes and take firm steps towards gender equality in sport.

With the Tampa Bay Buccaneers

Maral Javadifar: Assistant strength and conditioning coach. She has a Ph.D. in Physiotherapy, which gives her an extra on her team and also in front of others.

MJ was a basketball player at Pace University, where she studied Molecular Biology. She subsequently attended Virginia Commonwealth University to complete her residency in Sports Physical Therapy.

Lori Locust: Assistant defensive line coach. She ventured as a coach after playing semi-professional soccer. He studied at Temple University.

Along with Kacy Rodgers, she led the Tampa Bay defense to be the best in the NFL in 2019, registering 73.8 rushing yards per game and 3.26 yards per rush.

“MJ and I are here to help Tampa Bay win. It doesn’t matter if we’re the first or the 273 here. We know there weren’t many women before us, but it’s not something that influences what we do, “she said on the Buccaneers website.

In addition to Javadifar and Locust, Tampa Bay has Jacqueline Davidson as research director and Carly Helfand, who serves as an assistant scout.

With the Kansas City Chiefs

Tiffany Morton: Assistant Athletic Trainer. She is in charge of the management of preventive and emergency medical care for the players both in training and in games.

Her experience in the NFL began with the Minnesota Vikings in 2015, with an internship. She joined the Chiefs on a temporary basis as an athletic coach in the 2015-16 season and, upon completion, received the full-time position.

Julie Frymyer: Assistant Athletic Trainer. She is also a physical therapist and was hired by Kansas City in 2018.

Being part of the women’s group in Super Bowl LV is not her first major achievement, as she already boasts last season’s championship with the Chiefs.

Her footprint in the NFL will grow this Sunday, but it started many years ago. Sarah Thomas’s choice for the Super Bowl is another great example for women who dream of getting into the sport, no matter the area.

The official is the first woman to participate in a football game, in the NFL playoffs and, of course, now it will also be in the most important game of the season.

Like that of her teammates, the story of this referee is worth noting, so we leave it here for you to know it completely.

These women are not the only ones working in the NFL or in major sports franchises internationally. Their names are written in gold letters along with others like Darcie Glazer Kassewitz, Emily Zaler, Katie Sowers, Chelsea Romero, Jennifer King, Bianca Smith, or Hayley Moore.