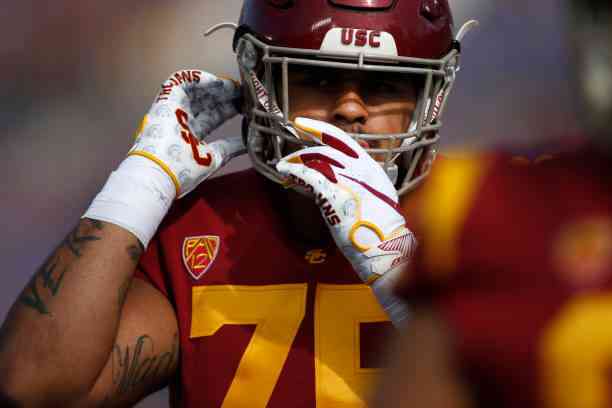 Inside offensive lineman classes aren’t always very deep and talented, but OL Alijah Vera-Tucker is arguably the best prospect in this field and with first-round quality. While his versatility allows him to perform as an offensive tackle as well, it is on the inside of the line where he best exploits his capabilities and does it better than anyone else in this class of the 2021 NFL Draft.

Vera-Tucker began his college football career in 2017, but his rookie season decided not to play it, and in 2018 he was present with USC as a reserve and recurring offensive lineman on special teams. Until 2019, he took ownership, the year in which he was part of the All-Pac 12 second team (conference). In 2020, he started by deciding that he would not play the season because of COVID-19.

However, once the Pac-12 conference administration announced that the campaign would take place, it came back, and it ended up being his best season with USC. Vera-Tucker ended up a part of the All-Pac 12 first team and was awarded the Morris Trophy as the best offensive lineman in the conference.

While he performs best as an offensive guard, a versatile player can play as an offensive tackle protecting the quarterback’s blind side. He has a hand strength that allows him to deal with the first-time defender and is dominant when paired with a teammate to prevent him from passing through. In addition, once the confrontation is hand-to-hand, he usually wins considerably.

A good blocking technique, a brutal first hit of force against defensive linemen, effectively deals with bigger opponents. He is very good at closing spaces so that the opponent does not find where to attack the quarterback, in addition to forcing him to try to get on the opposite side to where he lined up. He knows how to follow the plays blocking effectively when advancing.

Finally, he is more effective in blocking the passing game than the ground game, and he knows how to effectively adjust the blocking once he could be defeated by the player who is blocking in the first instance.

What are your his opportunities?

Repeatedly he gets to lose in some plays and blocks, because he does not understand that the defense tries to evade him by entering from other sides contrary to his own. In other words, there are times when the rival strategy covers no one. You may have trouble with fast pass rushers, especially those with high speed.

His technique is good, but sometimes he puts his hands on his shoulders in a certain way that can end in punishment. He does not have the best recovery once he is passed by the defender, although he usually adjusts the block. Finally, his inside steps and inside blocks when lined up at offensive tackle are a weak point that he must work on.