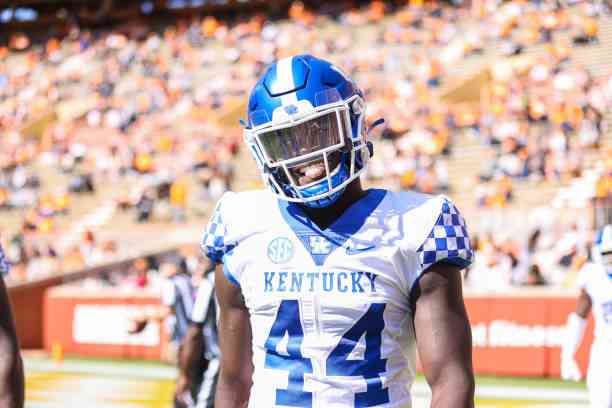 One player who has risen in value down the stretch of the 2021 NFL Draft is linebacker Jamin Davis, who showed a great performance on his Pro Day. Davis can sneak into the first round, being the third or fourth among the players in his position, although I feel like early in the second day, he might be a better option for many teams.

Davis is a talent that still needs to be honed, and he might not be considered a starter right away; therefore, it would not cause much attention on the first day of the draft. However, there is that possibility of seeing him as a first-round pick.

This is Jamin Davis from the University of Kentucky.

Jamin Davis started out playing high school in Georgia and began to gain attention with his performances in his junior year, leading his team in tackles and finishing as part of the region’s ideal team. His high school senior year was his confirmation season, finishing with an honorable mention from the state.

He was a three-star prospect heading into his college career, receiving offers from college programs like Lousiville, North Carolina State, and Purdue; But he ultimately decided to go to the University of Kentucky, where good prospects have come out at the position like Danny Trevathan, Avery Williamson, and Josh Allen, who ended up being a Top 10 pick in the 2019 NFL Draft.

The first year in Kentucky, he was sent to the practice team, from where he gained experience and gained weight. Little by little, his production crew, but it was not until his junior season that he exceeded 100 total tackles, 4 behind the line of scrimmage and 1.5 sacks, in addition to 3 intercepted passes with 2 passes defended and one fumble, which helped put him on the scouts’ radar. At the end of the 2020 campaign, he was declared ready for the 2021 NFL Draft.

Davis is a tall guy, who covers a lot of ground and has a great ability to run to the wings to form a good element against the running game. He usually shows patience when the play develops, reading and then reacting in a good way towards the offensive. He is a very effective player in the open field, showing the ability to make good chases and make the defensive play. He can be good for charging the quarterback, with the technique with his hands to remove blockers.

In a matter of cover, he shows the ability to change direction when covering personally or reacting to the receiver who arrives in his zone and effective hands to intercept. This makes him a likely three-down player.

What are His areas of opportunity?

His height at the time of attacking the rival is a problem against, because he tends to arrive too “standing,” placing himself in a disadvantageous position against strong players and thus losing the tackle. On his Pro Day, he showed great speed (4.47 seconds at 40 yards), but he does not transfer that speed on the field of play, sometimes seen at half throttle.

He is a better player covering by zone than staff, being sometimes surpassed by players with greater agility. He has a history of injuries, especially in the knee, and was therefore out for a while in 2018.