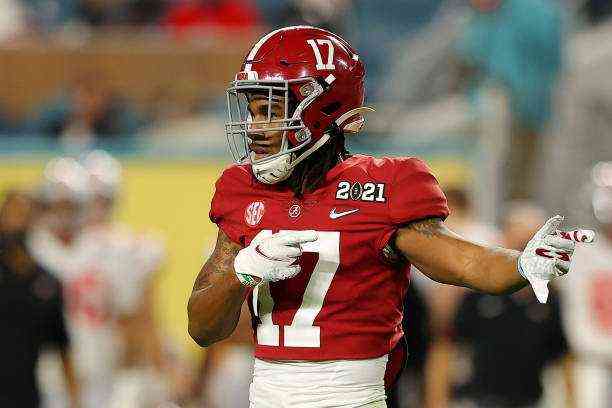 WR Jaylen Waddle is one of the top three prospective receivers in the 2021 NFL Draft class, and some even consider he could be selected as the first in the April event. Its speed, dynamism, and ability to generate yardage with the ball make it an explosive weapon that can fit virtually any offense. Aaron Jones renews Packers contract.

In 2018 he began his career in Alabama, and since that year, he became an explosive weapon. After registering 45 receptions, 848 yards, and 7 TDs (the latter two as the most in a season in his career) he was named the SEC Rookie of the Year (the conference where Alabama plays). In addition, in 16 punt returns, he accumulated 233 yards and 1 TD.

Already in his sophomore season, he confirmed himself as one of the best receivers in the nation, finishing with 33 receptions, 560 yards, and 6 TDs. In addition to that, he scored twice as a returner (once on a 98-yard kickoff and a 77-yard punt) to be named part of the conference’s All-SEC first team as a kickback returner and player of the Year in SEC Special Teams.

As a  junior, even though he suffered an ankle injury that limited him to just 6 games played in 2020, he finished with 28 receptions, 591 yards, and 4 TDs. Such was his impact in such a short time that he was named to the All-SEC second team. He decorated his season by returning to participate in the National Championship, in which he had 3 receptions for 34 yards.

Let’s start because he is the fastest prospect in the 2021 NFL Draft. In addition, he has as an extra that he is a specialist returning kickoff kicks and punts. With that, his strength and momentum are extraordinary after he was expected to miss the entire season after suffering a broken ankle in November but ended up playing in the National Championship.

A receiver with a brutal capacity to generate yards after the reception, great routes that he exploits from his acceleration (especially in deep passes), and knows how to make the cuts before the short pass. He knows how to catch the defenders that cover him (even more than one) thanks to his jumping ability. He becomes elite by lining up a slot and is a solid WR1, with enormous potential.

Threat on screen plays, lethal in open space due to its ability to leave defenders behind, uses its acceleration as a weapon of its game and exploits it to get long-yardage receptions. He is very good against personal cover, as his dynamism allows him to beat the cornerback most of the time. He knows how to recover a pass thrown behind him and gives his QB an extra option to extend the play.