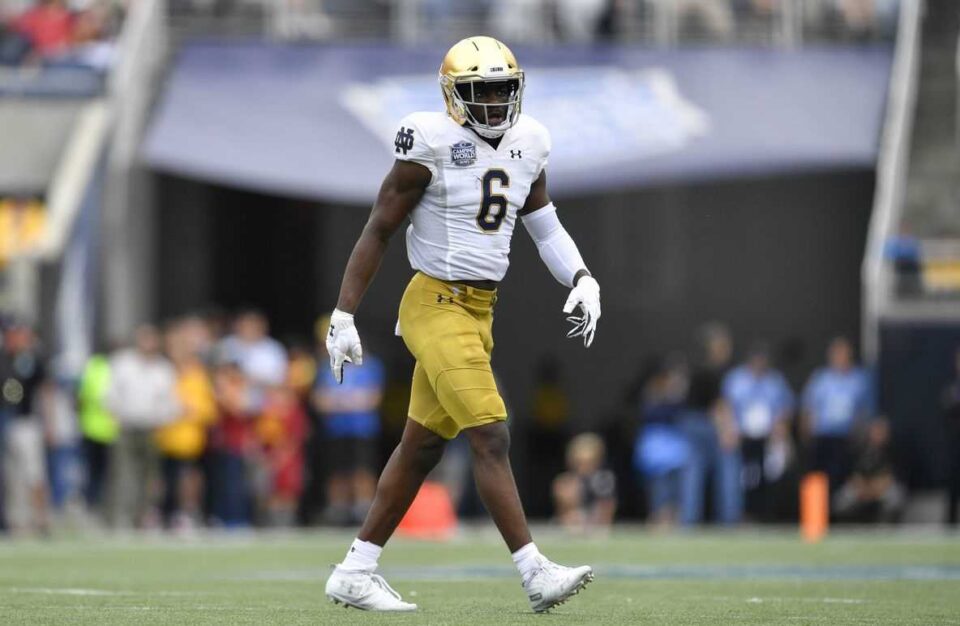 Jeremiah Owusu-Koramoah’s skills make him a great prospect heading into the 2021 NFL Draft because he can play in the front seven as well as out in coverage. A year ago, Isaiah Simmons attracted attention for playing linebacker and safety, and for this year, Owusu-Koramoah is that type of player.

Today he is not the top linebacker of the generation, but he is not far from it, being able to surprise the first day of the Draft by becoming the first to hear his name among the players in his position. By the way, his last name is pronounced oh-Wu-suh COR-ah-MO-ah.

This is Jeremiah Owusu-Koramoah from the University of Notre Dame.

Jeremiah Owusu-Koramoah is a player with offensive and defensive experience when he played in high school, plus he also practiced basketball. That brings him onto the pitch because he’s agile and quick to react, but he’s also a physical guy who loves to wreak havoc to hit offenses.

He could have been a Virginia player – where he grew up – but in the college selection process came proposals from Notre Dame and Michigan State, opting to play for the Fighting Irishmen. The first year he was not active. His debut came until 2018, but an ankle injury in training left him out for the rest of the season.

The best of his collegiate career came from 2019, showing himself as a three-downs player stopping the running game by reacting at full speed towards whoever has the ball as being effective covering against passing plays or charging towards the quarterback. His style and way of playing led him to win the Dick Butkus award in 2020, Defensive Player 2020 in the ACC, and be part of the All-America team unanimously the same year.

He is a versatile player and whose mix of strength and agility makes him a complete defender who can stay on the pitch in any situation. Owusu-Koramoah can play in the box or as a linebacker and from there react to the front with great speed and ability to attack the gap to make the tackle behind the line, but he can also be located as an outside linebacker from where he can start the hedging tight ends and running backs or loading.

One great quality is that, despite being a linebacker, he can line up in the slot like just another cornerback to cover. This situation draws a lot of attention from NFL teams against offensive lineups of four wide receivers and skilled tight ends, where specialists are required without the need to send a secondary defender to replace the linebacker. You will see that many of his highlights of this former Notre Dame player are covering the pass lined up in the slot.

He is complete because of his good instincts for coverage and his reading of the development of the play; he is quick to react and has good lateral speed, which makes him reach the sideline on time. He has a good vision which allows him to read the quarterback when he is in coverage without losing focus on his assignment. He also has the ability to make changes of direction to react in time to tricky plays.