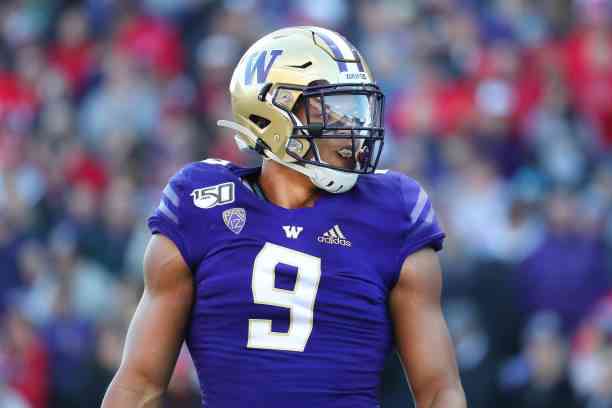 Once we have reviewed in depth the main prospects of the Big Board of First and Ten (at least, those that in our opinion have ample first-round possibilities), we bring you the brief analysis-profile of the rest of the prospects of our board as Joe Tryon, so let’s complete an X-ray as wide as possible of the players we will see parading throughout the three days of the 2021 NFL Draft.

In terms of our Draft Glossary, I define him as: A prospect with great potential, but with a lot to polish. A player who will perform very well as either an outside linebacker or defensive end. With ideal physical characteristics to be a good pass rusher; tall, strong and with long limbs. He had a very productive 2019 leading his team in tackles for loss (12.5) and sacks (8).

I like: His explosion at the centre moment is very good, and he complements it with good lateral agility to manoeuvre on the line. They have very good tackling technique and do so safely using mostly their hands after landing a good shot. In addition, it has the ability to jump to cover the flat area, which adds an element to its value.

I don’t like: the work it takes to convert his speed into power to “sink” the blocker, his game is all about speed and agility. He frequently exposes his chest, vulnerable to tackles knocking him out of his way to the QB. He tends to show his manoeuvring intentions before the snap, making the job easier for his opponents.

His X-Factor heading into the Draft: He is the perfect example of a player who was affected more than what benefited him by skipping the 2020 season, since he has only 14 games as a starter and most of the things he has to improve they are fully coachable; had he had more repetitions, he most likely would have improved.

His potential is so good that he could be taken in the second round without problem and immediately contribute to the team that selects him, first in a situational way and, eventually, as a starter. Teams like New England, Indianapolis, Pittsburgh, Seattle and the Rams would be places for it to flourish.