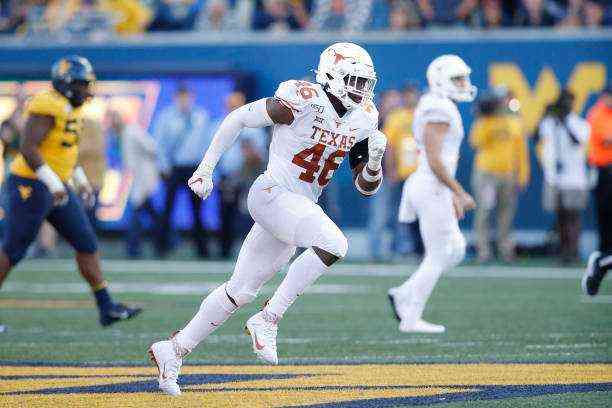 Among a group that does not offer any extraordinary talent to pressure the opposing QB, Joseph Ossai is emerging as an interesting prospect, with speed and a tireless engine that makes him attractive to NFL teams.

Tucked into a long-limbed physique, his skills can improve if he learns to optimize his physical qualities, yet he could already see play action from his freshman year.

Born in Nigeria, Ossai had an interesting passage through the University of Texas, accumulating in his three years 165 tackles, 30 of them for loss, with 11.5 sacks. The most interesting may be the seven times he stole the ball (2 interceptions and 5 forced fumbles).

Throughout his stay in Austin, he started 24 of the 36 games in which he participated. As a freshman he had 14 games of which he started two with 20 tackles and one sack. For 2019, he got the All-Big 12 appointment by leading his team with 90 tackles, 13.5 of them for loss, with five sacks and two interceptions.

Last year he was named to the All-American and All-Big 12 first team, in large part because he was the third best in the entire FBS with 16 tackles for loss and led his team with 5.5 sacks in nine games, to which he added three fumbles.

He spent his first two years with the Longhorns, dividing his time between linebacker and defensive end, which caused him not to achieve full development at either position. Until the third year, he stayed on the floor as an edge rusher, but still retaining the eventual responsibilities of jumping to cover pass.

The first thing that strikes you with Joseph Ossai is a non-stop engine, which puts you in a position to make plays or influence even if they are not going your way. His constant fighting has him getting tackles or sacks late on the down, even though it seems like the running back or the QB already got away.

He has very good athletic ability with which he covers a lot of ground and is constantly positioned close to the ball. He is constantly seen in the tackle.

One feature that makes him even more desirable is his ability to generate ball deliveries. He constantly ends the play with a hard hit on which he brings the ball, which sometimes makes the ball go free. You can give the ball back to your offense at important moments. He knows how to hit the QB in a timely manner and looks to punch the ball when it hits a runner from behind. Sometimes his punches are the kind of play that sets the tone for the match.

His skills pressing the opposing QB still has a lot to improve, but he has long arms and strong, active hands. He can beat the tackle through the inside gap.

He also has the ability to line up at two or four points at the end of the line, which can make him attractive for 3-4 or 4-3 front-ends, although he proved his best as a potential outside linebacker.