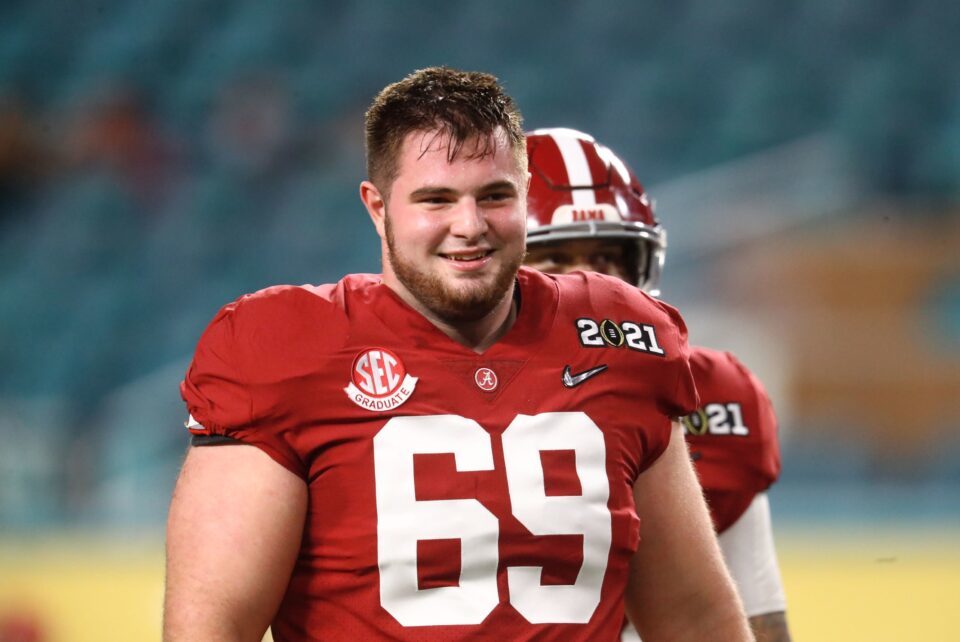 Once the main prospects of the First and Ten Big Board have been thoroughly reviewed (at least, those that, in our opinion have ample first-round possibilities), we bring you the brief analysis profile of the rest of the prospects on our board, such as Landon Dickerson. So we are going to complete an X-ray as wide as possible of the players that we will see parading throughout the three days of the 2021 NFL Draft.

In terms of our Draft Glossary, I define him as: a player with good athletic skills, smart to play, and good technique to excel in the NFL, but with a long history of injuries that could make any team-high on him reconsider his board. He has at least one game of college-level experience in each of the offensive line positions, thanks to the fact that he physically has the necessary tools to do a good job.

The team that takes it could take a great element for their offense and a great motivating leader for those around them. Despite the injuries he has suffered both at Florida State and Alabama, he has managed to come back and reinvent himself from adversity.

I like: the versatility he can bring to the offensive line, because he’s not necessarily willing to play in only one position. At this moment, we all see him as a center, not so much in his style of play that is aggressive, but because of his leadership and intelligence, a couple of intangibles that are hard to ignore.

He knows how to anticipate contact with his arms and hands to keep them away from the rival, in addition to aligning his body to be in the best position and avoid being unbalanced. He knows how to get out to the second level and sideline linebackers with apparent ease. Good pre-play reading to detect the load on the quarterback and make adjustments. He is one of those players that coaches like to coach.

I don’t like: he needs to show consistency in his technique because on many occasions, he is seen to use it well to block or protect, but then he relaxes, wanting to win the duels by force. Sometimes he does not know when to stop and falls into excesses that lead to late blows, so he must improve his discipline. He played in 13 games in the first three seasons at Florida State due to injuries, one of them to his right knee – which took him to the operating room – and ended his career in Alabama with another knee injury. This time, the left one also required surgery. That record is a great red flag heading into the 2021 NFL Draft.

His X-Factor Heading into the Draft: Because of the position, NFL teams might consider selecting him late in the first round. The problem with Dickerson is the risk of taking it early and running into durability problems in your career. I see it unlikely – not impossible – that he could come out in the first round of the 20 selection onwards, where there are many teams in need of reinforcing their offensive line.

A less risky place to take a player like Dickerson would be in the second round, though it would come as no surprise if he slides into the third, where it would be worth it. He is one of the best in his position in terms of talent, but he might not be the first of this group to be named. The Packers are one of the first-round candidates to take Dickerson, but there are teams like the Raiders or Steelers who could give him a shot in the second round.

Aaron Rodgers Is Not Vaccinated Because It Can Cause Sterility, According To Him